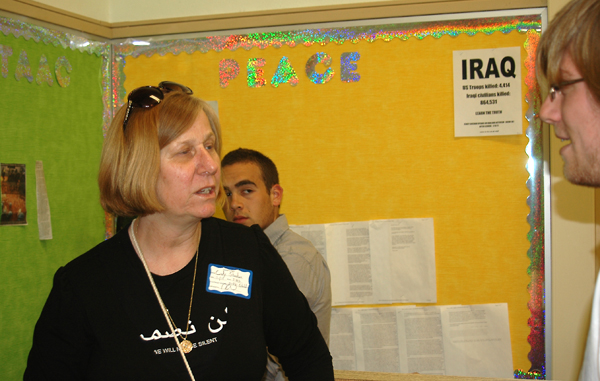 A “Tornado” stormed through CVHS on Feb. 11. Cindy Sheehan, an anti-war activist code-named “The Tornado” by the Secret Service,  spoke to members of the Peace in the Middle East Club and others.

“It’s been almost seven years since my son died,” Sheehan remarked solemnly. Her son Casey Sheehan died on Army duty in Iraq on April 4, 2004.  After this event Sheehan held a protest wanting to talk to President George W. Bush about the war and gained a lot of attention both positively and negatively. “The Tornado” has since never been afraid to speak openly about her views.

“Bush was popular when my son was killed. I was unpopular,” said Sheehan to enforce the notion that she was not a wimp.

The Peace in the Middle East Club provided refreshments to the waiting students, teachers, and former students of CVHS who had heard of the event. The former president of the Peace in the Middle East club came even though he is now a freshman in college. At first the room was half-full of people but by the time Sheehan showed up it was packed to its maximum  capacity of around 35. Sheehan’s talk lasted for little over an hour.

“What do you think were the highlights?” asked an audience member, referring to Sheehan’s history as an anti-war activist. Sheehan responded by telling the story of how one time when she was in Venice, Italy, a woman came up to her and said, “Every boy in my family was going to join the National Guard. Now, after seeing you march in D.C., not one of them went.”

Sheehan also explained that victories in her cause are few and far between. Her other victory was about a village near a military base where the base was supposedly trying to force the villagers out so they could construct a golf course. According to Sheehan, she showed up, protested and helped to save the village.

“We think that our interests supersede others’ interests,” said Sheehan. She explained that the United States supported former President Mubarak of Egypt because of oil. Sheehan believes the war in Iraq is just another way to keep tabs on the oil that America needs to survive.

“They’re all in it for themselves,” remarked Sheehan when talking about the government’s involvement in the Middle East.

“You guys are basically prisoners here at CVHS,” said Sheehan. She went on to describe how she had never seen fences so high or monstrous at a high school.

When asked what she wanted to tell students Sheehan responded, “They need to look in their communities, identify a need and fix it … and always have fun doing it.”

Sheehan described how students could not necessarily help Egypt specifically but they could become activists right now. Sheehan believes there is no sense of community in America any longer because of many factors separating the individual. Things like computers and TVs allow us to remain aloof in the overall way of things instead of saying “hi” to a neighbor.

Sheehan is currently looking into running for president as a left-wing independent candidate. She  said she is interested in  protecting the oppressed and cutting funding from the military to eliminate our debt.