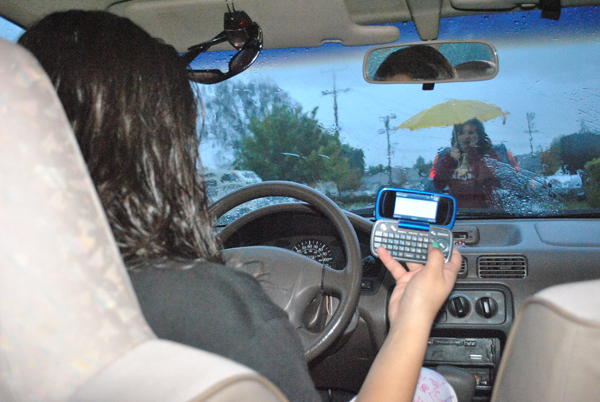 Texting while driving has been proven to be as harmful as drunk driving, but teenage drivers and even adults continue to partake in this dangerous habit.

The law prohibiting drivers from texting was passed on Jan. 1, 2009, and California Highway Patrol Officer Roland Tuazon said that “about 96 percent of drivers are in compliance with the law.”

The Olympian compiled data at the busy intersection of Mabel Avenue and Redwood Road immediately after school, and discovered that three percent of drivers do indeed text while driving. Fifteen out of 511 drivers were observed texting while driving during a half-hour time interval. Although this may seem like a small number, imagine how many drivers there are in Castro Valley and how many of those drivers are texting while driving.

Texting drivers are well aware that their multitasking activity is illegal, and evidently, some even go to extremes to avoid being caught by authorities.

“Whenever somebody sees a black and white [police car], drivers often literally throw their phone down to avoid being ticketed,” said Tuazon.

The administrative fees for a texting-while-driving violation are $25, in addition to the varying county fees, usually results in a fee of roughly $100 per violation. Contrary to the popular belief, the highway patrol does not receive any money for any of the tickets that its officers write.

“If we write a ticket in Castro Valley, the [Alameda County court] gets the majority of the money,” Tuazon clarifies. “The rest of that money does go back to the state, but that gets redistributed evenly to the 58 counties. We get our money and our budget from vehicle registration.”

“Texting while driving is not a good thing to do because you can get distracted very easily,” said Leal.

Fellow student driver Cameron Moy offered some wise advice regarding the general use of phones while driving.

“One should only text while driving should an emergency arise; otherwise, pulling over to make a phone call would suffice,” said Moy.

For more information about this issue, visit www.keepthedrive.com.