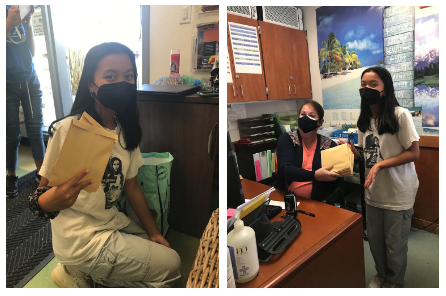 Safe sex kits are rolling out in the Wellness Center, thanks wholly to CVHS senior Zoe Dorado.

Since September, Dorado has been collaborating with the CVHS Wellness Center to make sure that the school acknowledges and cares about students’ sexual health. She has been working every Thursday to pack brown paper bags with two condoms, a packet of lube, a condom information sheet, and a “Don’t Panic” guide curated by Dorado. The condom packets, lube, and info sheets were donated by the Alameda County Department of Public Health HIV STI Unit. In December, Dorado got CVHS club She’s the First involved, and in one day they made about 100 packs.

“CVHS is one of only four out of 31 Alameda County high schools which doesn’t provide reproductive health services at its health center, according to the California School Based Health Alliance.” Dorado wrote. She began combating the issue back in May through two articles for The Olympian, “Trojans in search of condoms” and the follow-up, “CVHS discusses its culture around sex: ‘A conversation for everybody.’”

Following her groundbreaking articles, Dorado reached out to Dot Theodore, then school board president, who referred her to the Director of Student Services and Title IX Coordinator, Nicholas McMaster, to request the change. On June 22, board policy 5141.25: Availability of Condoms was approved in CVUSD, and Dorado began contacting local pharmacies for information regarding if and where they had emergency contraceptives for her “Don’t Panic” guide.

According to the Wellness Center Behavioral Health Services Coordinator, Marian Meadows, “it was important to know that student health and wellness was a priority of the district and that we had the backing of the board.”

This is in great contrast to what Rachel Maddow proclaimed in her valedictorian speech of 1990: “our parents and leaders cannot even say the word condom in front of one another.”

Today “student health and wellness is more easily discussed as a need” and “students also expect more of adults, know more of their rights, and are better advocates,” Meadows said.

These kits can be found in the Wellness Center, health office, and Redwood High School. Aside from safe sex kits, Dorado has worked with Meadows to implement a training regarding the social-emotional side of sex—something that is not normally covered in schools—which will be happening soon for Wellness Center staff, so they will be equipped to provide individual sexual health counseling for students. The platform to be utilized will be Sexual Health Education & HIV Prevention Education – Sexual Health Educator (SHE) Training Program.

Meadows also said that Phase Two, after the initial roll-out of safe sex kits, will include dental dams and other types of STI prevention methods, because “also, [we need to] think about queer health, and how to support queer students … and what their sexual health needs are.”

Dorado said she wants to see something similar to Berkeley High’s peer-education program implemented here in order to further sex ed and consent education in school with medical career students and “wellness warriors” becoming peer-health educators, not just for freshman, and to initiate collaboration between the Wellness Center, administration, and students—“I want students to build stronger sexual citizenship, empathy, transparency between them and the administration, and ultimately, help create a culture where everyone feels safer, respected, and heard.”

Dorado is also an editor for The Olympian.