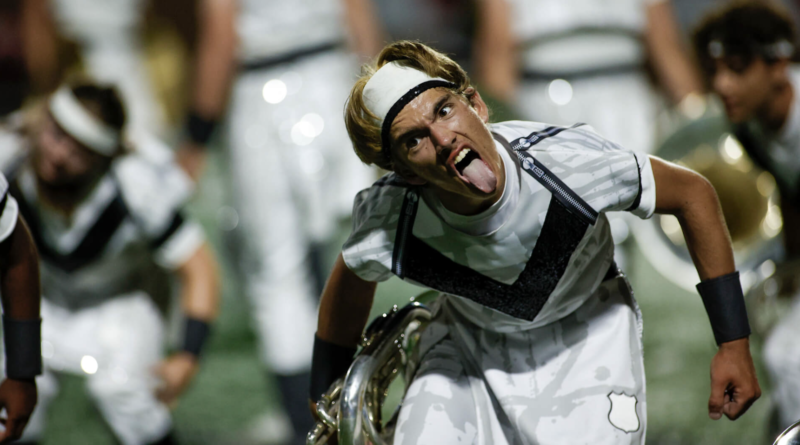 “We took home and won all the caption awards,” Burfield said. “Each sector of the band –the percussion, the color guard, the brass, the visuals– we won all of it compared to our competitors. Which means we got what’s called the clean sweep. Which means we won everything that could be won.”

One hundred and forty members strong, the group started in April, meeting on weekends regularly for seven hours and having multiple-day-long camps where members would sleep over.

“We spent those days just working 100 percent on the music and the marching,” Burfield said.

Then summer began, with temperatures reaching up to 115 degrees Fahrenheit. On July 14, the Cadets embarked on their journey, often sleeping in high school gymnasiums as they traveled across the country performing their show “Somewhere New.”

“We moved in which meant we said goodbye to our families for about two-something months. Fully committed every day. Hours living on the road where we played, practiced, competed, and repeated.”

As a member of the Cadets, Burfield has grown not just as a musician, but as a person.

“In the beginning, it was kind of worrying. I didn’t know many people but as it went on, I started learning everyone’s names. I started meeting everyone. And seeing everyone every day was just super. It was amazing. I have a say again, I’ve made lifelong friends.”

Burfield is also a member of the CVHS Marching Band and Guard, where he learned about the Cadets through band director Keita Hasegawa and CVHS graduate Edmund Bascon.

As a leading member of the group, Burfield is bringing what he’s learned from the Cadets to his fellow band members. Besides technical and physical aspects of marching band such as musical warm-ups, Burfield emphasizes the importance of tackling mental challenges such as “outlook and expectations,” because, as he expressed, “marching band is mostly mental challenges.”

But the challenges are worth it in the end. While the time of the Vanguard Cadets’ next season has yet to be announced, Burfield encourages others to experience playing in a professional marching band group.

“To my band students, if you’re interested in DCI, you should do it. It was an amazing experience,” he said. “I recommend it fully.”