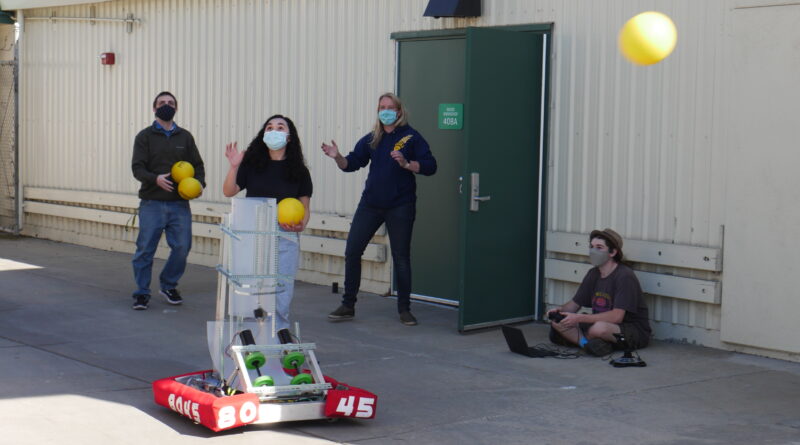 One of the many negatives of the pandemic is how events that are supposed to happen in person are either cancelled or heavily drawn back. However, members of the CVHS club, The Wallace Dynasty, are still able to do what they normally do: build robots.

First, for clarification, there are two robotics clubs at CVHS, but despite what you might think, they don’t have a rivalry.

“There’s a lot of people that are part of both clubs because we’re the one that competes, so we compete in the competitions. The other one is just fun, get to know what robotics is,” said team mentor Jessica Porter.

The robot building competition that the club joined is this year’s FIRST (For Inspiration and Recognition of Science and Technology) competition which is like a dog show for robots.

“We had five challenges. We chose to do a challenge where we were driving around the courses and shooting the nerf foam balls into the scoreboard,” said sophomore Karen Diesta.

“At the bottom [front part], we have our launcher which are some compliant wheels [which are these green motorized wheels that are rubbery and launch dodgeballs] that are attached to this frame that moves up and down via a linear actuator that changes the angle of our launch. We have this tube made of flexible plastic and we load three balls at a time because any more than that is not allowed.”

The name of the robot is Bruce Wallace and the software that controls it is called FRC Driver Station.

The Wallace Dynasty has not had to do fundraisers at the school because of sponsors they’ve had in the past like OSIsoft, Google, and NASA.

“As long as we keep building robots, and eventually, we do have to show evidence of the robot to the corporate sponsors, likely they’ll be able to sponsor us next year and the year after, keeping it going for future high school generations,” said team mentor Nicholas Tapia.