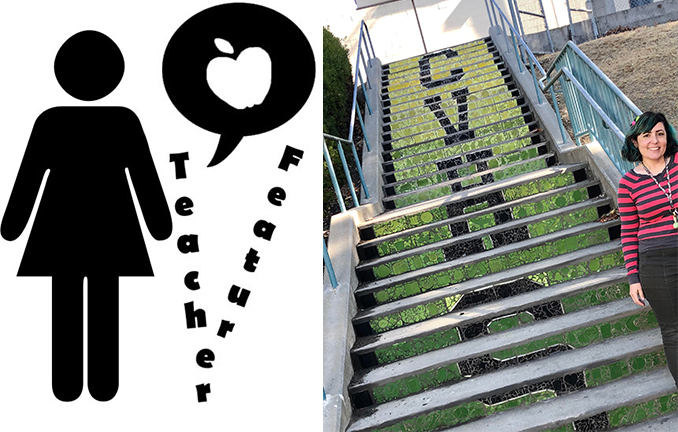 Many around the campus stare in awe while in the presence of the many murals that create the vibrant aura around our campus, although few know the person responsible for creating such masterpieces. You may have seen such artworks around our campus such as the Trojans mosaic outside the office and the stairways covered with little clay pieces. That mastermind behind these is ceramics teacher, Jennifer Jervis.

The creative spirit and expression that Jervis displays all started out in her own junior year in a ceramics class. There she had found that she was able to project her views and feelings into the world in a manner that was more powerful than words.

This creative vigor had only been expanded upon during her visit to Mexico in 2011. “In Barcelona they have these beautiful mosaic benches, all around… these artworks have inspired me in a lot of ways,” Jervis said.

Her visits have not been her only motivation however. Jervis has taken inspiration from other talented artists such as Vincent Van Gogh who she believes invokes powerful emotion and messages in his artwork. That has inspired her to provide meaning in each and every artwork that she creates.

This freedom of expression that Jervis has experienced is something that she could not keep to herself which is one of the main reasons that she has become a teacher, in order to help the creative imaginations of others unfold.

One has to wonder how much time and commitment such vibrant ideas take to put into fruition. According to Jervis, each project is methodically planned and takes about two weeks to complete although she says that the work is worth it to see the motivation that springs to life in the eyes of the children.

Jervis says that it brings her joy when people are able to gain joy from her artwork. Students and staff alike have thanked her, even when they are no longer a part of the CVHS community. Even students who have graduated come back to the campus to show their relatives the artwork that have made their days at CVHS much brighter.

“It’s becoming generational. Eventually I am going to have the kids of these kids come, it’s almost like a legacy,” Jervis said.

Despite the challenges that come along with hosting an art class in distance learning, Jervis is persevering. Although our future in this pandemic is blurry, one thing is clear to see. No matter what Jervis ends up doing in her career, it is sure that she will invoke passion and inspiration wherever she leads.

“Who knows, maybe us overcoming this pandemic will lead to another mural about grit and unity,” said Jervis.

3 thoughts on “Jervis inspires through her many creations”