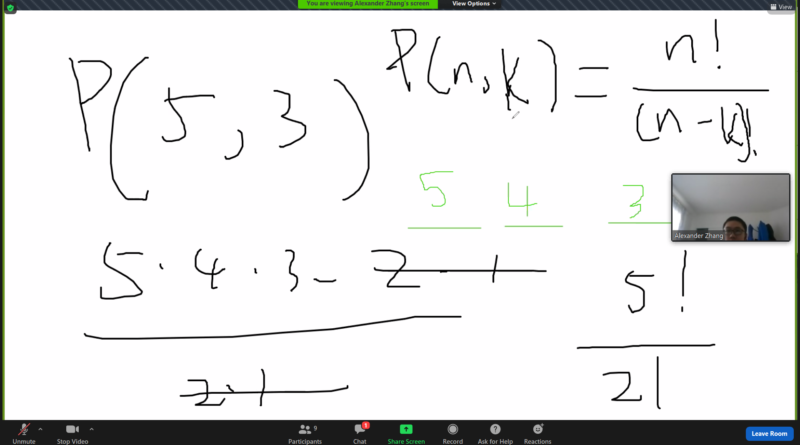 Eight CVHS mathematics enthusiasts are working together to help over 60 Canyon and Creekside middle schoolers prepare for the American Mathematics Competition 8 (AMC 8) in November and the Mathcounts competition in February.

These middle schoolers are taught by a volunteer-majority from the Mu Alpha Theta club at CVHS. In the club meetings on Monday afternoons, volunteers discuss and plan on what to teach to the middle schoolers in addition to learning or solving a problem.

During the student-run volunteer sessions on Friday afternoons, middle schoolers are taught applications of factorials, permutations, combinations, and other topics that they would otherwise not learn in a middle school math class.

“I get to meet great people and it’s a good opportunity for meaningful community service, and I like doing math stuff,” said junior Alex Zhang, club president. Zhang has participated in Mathcounts for two years and is in his third year of Mu Alpha Theta.

Many of the middle schoolers have lost motivation due to the difference compared to previous years. However, some remain resilient to the transition to virtual meetings and try their best.

“I did pretty bad in the previous years and I want to get better this year. I’ve been preparing and stuff,” said Creekside eighth grader Sean Chen. As this is his last year in Mathcounts, as well as his eligibility for the AMC 8, Chen hopes to take advantage of the less chaotic meetings he experienced in previous years.

The volunteers are divided into two groups: worksheets and grading. The worksheets group collaborates on typing word problems in sets of five and then converting them into viewable PDFs. The grading group assigns points based on work and correctness, giving feedback and tips.

One major issue the volunteers face is the lack of engagement with the middle schoolers. Despite having many members, Mathcounts only has about 20 students completing the worksheets, and even less attending the meetings.

“The main problem is the middle schooler’s lack of response. Alex just speaks into a sea of blank screens. There is not really much to motivate them to do this stuff,” said junior Cedric David, one of Mu Alpha Theta’s newest members.

Volunteers have tried several ways to make Mathcounts more appealing for its members. The worksheets group has tried an incentive by adding participants’ names into word problems. Other possible ideas discussed so far include raffles, homework passes, and a points system.

The AMC 8 is just around the corner, from Nov. 6-10. To prepare and motivate the middle schoolers for the time being, Zhang and the other Mu Alpha Theta officers have created their own competition called the Contest of Wonderful Stuff (COWS). Volunteers hope there will be more participation from the middle schoolers so that they can make their potential skills in math count.