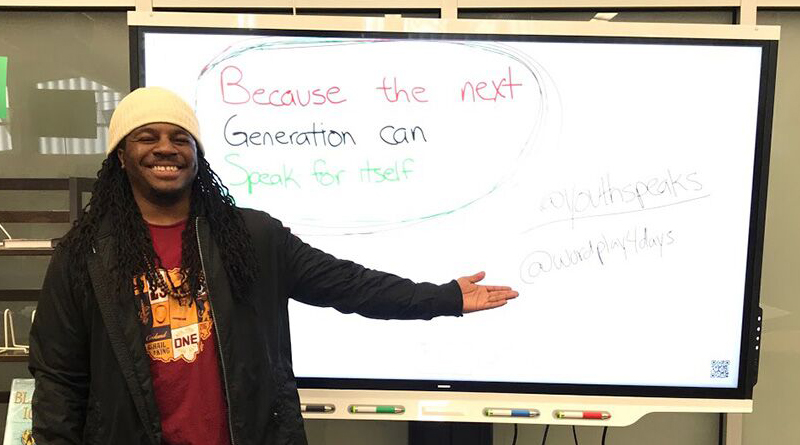 CVHS students practiced public speaking in a unique offering focused on personal development and giving voices to youth. The event was conducted by Youth Speaks, a nonprofit organization dedicated to shaping young people to be strong societal activists, in the school library during Trojan Time on March 19 and 20.

Darius Simpson of Youth Speaks, who led the session on both days, started with a powerful speech utilizing many techniques important in persuasion and general speaking, demonstrating to the attendees the capabilities of expression at its purest form. “I believe Scar (from “The Lion King”) was a revolutionary…much like Moses or Malcolm X,” he said. “Scar, I too am the darker brother… I feel you bro, I know a little brother scorned when I see it.”

Throughout the periods, students worked on developing confidence and respect, and expressing themselves in several activities forcing some out of their comfort zone. Other activities involved critical thinking, and each student wrote a free-verse poem to combine these ideas.

The two ideals most strongly promoted were “there are no wrong answers” and “the standard is yourself,” with the idea behind each essentially being that anything may be different if viewed from another perspective, and that it is up to yourself to decide the status of what you have done.

Dana Adams, librarian, had taken the steps necessary for Youth Speaks to come to CVHS some time in advance. Though roughly 30 students had signed up for the event via Teachmore, there were well over this number in attendance on both days.

The Youth Speaks slogan is “Because the next generation can speak for itself,” which reflects its overall goal to transform the classroom into a community promoting student thought, to achieve an active and inclusive culture.

When asked of how he felt of the work done by groups such as Youth Speaks, Simpson replied “I feel that it’s extremely necessary, because there’s faces that aren’t being given to young folks or people in general, so to use their voices in creative ways [is great]. I’m super appreciative to be on this side of it, providing those faces for young folk. I remember I wasn’t able to have those when I was in high school and younger, so I’m super excited to be right in with young people.”