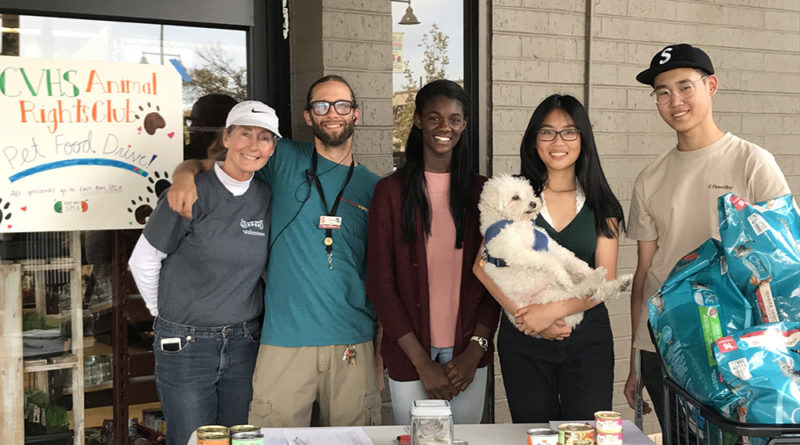 CVHS has a new Animals’ Rights Club and it is making several changes to our school community. The club was started this year by the sibling duo, Alina and Alan Huang. Both of them always had love and passion for animals. They were horrified after witnessing videos on Instagram of the cows being abused and killed to be used for human meals. The purpose of the club is to inform people on the several issues regarding domestic and wildlife animals.

“I grew up loving animals and was shocked to hear that there hasn’t been an animal based club for over ten years,” said sophomore Alina.

On weekends, the club holds events with the Factory Farm Awareness Coalition (FFAC). One notable event was the Vegan Mac Down, a  bake-off to see who can make the tastiest vegan mac and cheese. In the future, the club will volunteer at events held by the East Bay Society for the Prevention of Cruelty to Animals.

“We also host monthly pet food drives outside the Castro Valley Pet Food Express and all donations go to the Oakland SPCA shelter to feed the rescues. We typically collect $200 to $500,” said senior Alan.

The club also offers internships with FFAC; Alina has one such position. Right now there are no more spring internships, but summer internships are still available.

Alina has also recently decided to become vegetarian and move towards becoming vegan. Since the beginning of the school year, she has been cutting down on any kind of animal meats. She’s even tried vegan chicken.

“Becoming vegetarian was fairly easy to me. I started cooking my own food more. I didn’t get much support from my strict parents and the hardest part is avoiding sushi,” she said.

The club meets on Thursday at lunch in room 716. The science teacher Basudha Mukherjee is the club’s supervisor. The club also works with CVHS bookroom attendant Jennifer Oliver, who helps coordinate events and suggest projects to take on. Oliver also volunteers weekly at the EBSPCA.

During club meetings, there is a topic that all of the club members discuss. They usually discuss about deforestation, factory farming, plastic use, animal testing, plant-based lifestyles, dead zones in the ocean, overfishing, fur clothing, and abuse of domestic and farm animals. Occasionally, there are guest speakers from EBSPCA and FFAC.

The Animals’ Rights Club has already helped our community on the inside and the outside. You can show your support by attending the meetings or participating in their pet food drives on weekends.