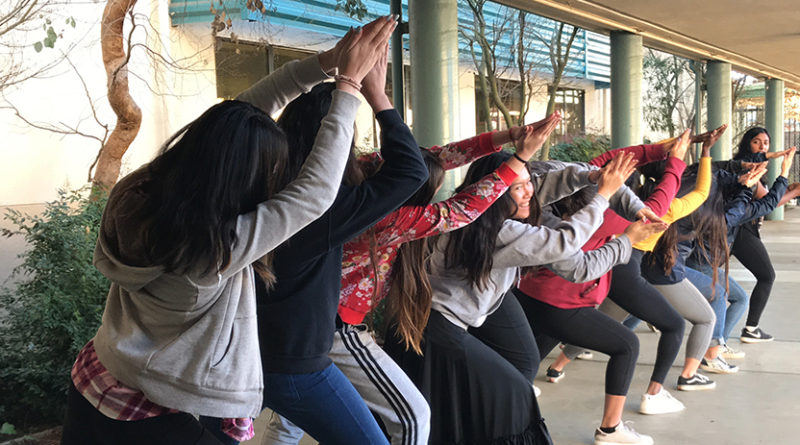 If you happen to walk by 700 hall in the middle of the week after school, you might catch a glimpse of the Cultural Dance Team practicing. The team consists of about 20 students who perform more than ten types of dances from different cultures, such as a bharatanatyam dance, a Chinese ribbon dance, and a Laos 1000 hands dance, to name a few.

The team is fairly new, having only formed just last year under the leadership of Isis Poulose, now a sophomore.

“I had the idea when my sister and I were talking about high school struggles and I originally had the idea of a club that studied a new country every week. Unfortunately my idea got shot down so I had to think of something else,” Poulose explained. “My final idea was to make some sort of dance team that was accepting and would teach people about different cultures in a fun way.”

Not only do the members get to learn a variety of different dances, but they get to perform for friends and family. Currently, they are preparing for their spring showcase, which they hope to perform sometime in April.

“Last year we wanted to have our performance in the CFA but due to complications, we ended up having it in the cafeteria. We are hoping to have our next show prepared in April but the renting process is difficult as a high schooler without any money,” Poulose laughed.

Last year dancers donated the money they earned from their performance to child refugees in Syria, but Poulose says they might choose a new charity.

Poulose directly teaches and choreographs the dances, along with the help of a few other  CVHS students. Anyone can join the club and the dances are easy enough for anyone to learn, regardless if they have a dancing background or not.

“I joined because I wanted an outlet of creativity and wanted to learn more about dance,” sophomore Jolie Tran said. “My favorite part about it is getting along with the members of the club and being able to show off the diversity we have in our school.”

Tran will be performing a polka and an Indian wings duet, in addition to the all-cast Vietnamese dance.

“I’m most looking forward to our showcase in the spring,” Tran added. “I can’t wait to show off all our hard work from over the past year!”