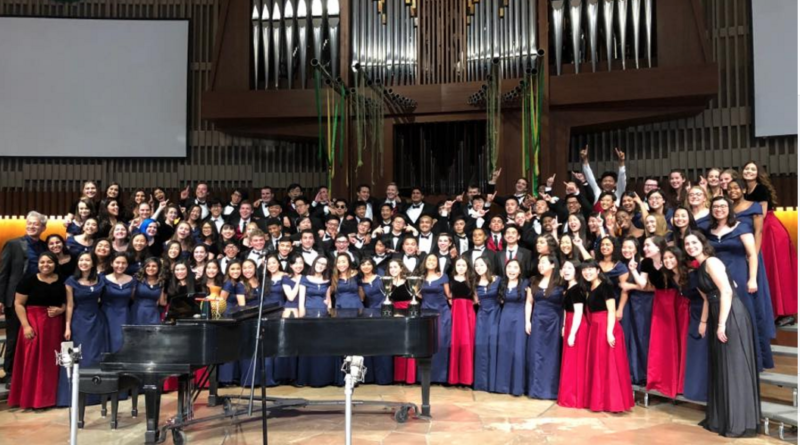 Hands locked, students said their final prayers as the announcer paused in the moments before Castro Valley became the best choir program in California. Flurries of students in red and blue ran down the aisle, sobbing and embracing, in disbelief as they made history.

The CVHS A Cappella and Madrigals choirs stole two first place trophies for the first time ever at the 2018 Northern California Golden State Choral Competition. CVHS has never won first place in either small choir nor large choir categories before and the school became one of only three to ever win both categories in the same year.

“Winning this competition proved that all of our hard work was worth it. This year we made both a family and history, and getting first place together was the absolute perfect way to end it,” reflected co-choir president Maddy Albright.

The Golden State Choral Competition is the most prestigious competition for high school choirs in the state. Choirs from all over Northern California come to Pacific Union College each year to compete. Only the best ten choirs are invited to attend and each performs three songs, two of their choice and one required piece.

Madrigals, the CVHS small choir, was the first to perform of the day. The singers gracefully began their set with “Ave Maria” by Robert Parsons, the required piece. Then, they transitioned into “O Sapientia” by Tadeja Vulc, and finished their set with “Go, Lovely Rose” by Eric Whitacre.

A Cappella, the large choir, was last to perform of the day. The singers began their set with “Christus Factus Est” composed by Anton Bruckner, and followed it with “Dirshu Adonai” by Kenneth/Kirsten Lampl, and “Kanaval” by Sydney Guillaume. At the end of all of the performances, an awards ceremony took place.

Students and choir teacher Laryssa Sadoway now wonder what this win does for the program going forward.

“It means that we are held to the standard of being the top choir in the state. It sets a standard for the level of music education in future years. It starts a legacy of superior performance at the school, and it makes all of us, myself included, wonder what’s next for the program,” Sadoway said.

Seniors in the choir program begin to reflect on the short time they have left in program as this win for them is their final time performing in this competition.

“As a senior, that was my third and final Golden State. It was so memorable and an emotional rollercoaster, but I am so glad that it happened the way it did, and I will be extremely sad to leave this program,” said co-choir president Luka Uchiyama.

“Choir has given me a place to grow and meet friends throughout high school and I’ve come to love it so much,” said Clark Smith, a senior in Madrigals and A Cappella. “I will miss more than anything else in high school, singing beautiful music with friends day in and day out. Music is like medicine for my brain and really brightens my day.”