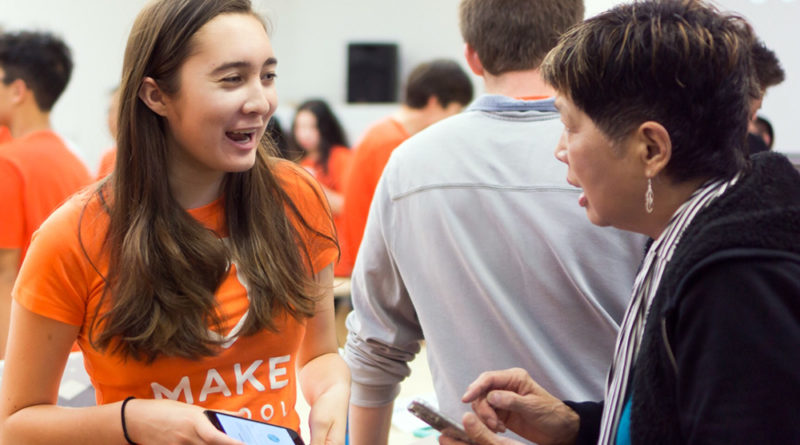 This summer I had the opportunity to do something most high school students can’t say they’ve done: I programmed a game for the Apple App Store. As much as I would love to claim that it was an effortless feat, I’m afraid I have to admit that it was one of the most draining things I’ve ever experienced. But it was worth every second of lost sleep, every blurry whirl of confusion, and every otherworldly commuting experience on BART. All of the exhaust I felt this summer paid off in the simplicity of being able to pull out my phone and proudly exclaim, “I made this.”

Although I certainly learned a lot about coding in general, I definitely learned far more about myself. I was essentially working a nine-to-five job every day, with an additional two hours of commute to Make School’s Summer Academy in San Francisco. On the first day, I was terrified. I didn’t know a single soul in that building, and to make matters even more petrifying, I was one of the only two girls in my class.

I could barely see myself in the rest of the group; I wasn’t at all motivated to get out of bed every day and commit myself to spending most of my waking hours around people I felt that I couldn’t relate to.

While my fingers ran rapidly across my laptop’s keyboard, I felt myself wanting to just disappear into the artificially-lit open floor plan. It wasn’t that I was in poor company; I met incredible people from all over the planet, who I know will go far in the tech industry. This was the first time, though, I was forced to recognize how difficult it actually is being underrepresented in the tech industry.

Instead of wallowing in self pity and ostracization, I poured myself into the two things I’m most passionate about: activism and coding. I designed an app to raise awareness to the rising effects of climate change to inspire the inhabitants of Earth to seek change and the protection of their environment.

The patriarchal tide thrust a wave of realization and forced pragmatism in my direction. And boy, did I learn how to surf. I managed to remain productive throughout the summer despite my constantly heightening anxiety. In a way, leaning into the discomfort that I experienced on the daily only pushed me to work harder. Now, Upstream: Combat Climate Change is in the App Store and I’ve grown massively as both a programmer and person.

2 thoughts on “I coded an app this summer, and it was amazing”