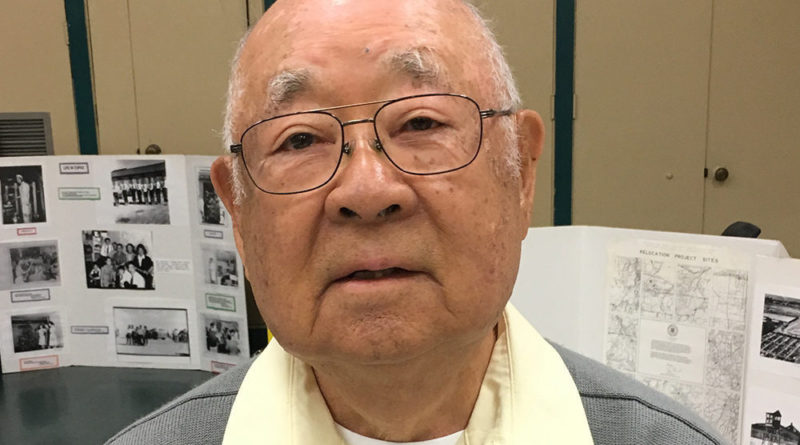 Norm Hirose, now a 90-year-old man, was one of the many placed in Japanese internment camps during World War II; he came to CVHS to tell us his story.

On Dec. 7, 1941, Japan attacked Pearl Harbor, leading to great fear in the U.S. that there would be following tremors of terror. Because of such fears, President Franklin D. Roosevelt decided that some people of Japanese ethnicity would be relocated to internment camps. Families all over were forced to pack up everything they could in suitcases and move to places specifically designated for them because of “safety precautions.”

Hirose and his family were specifically placed at what was formerly a horse racetrack. The horse stalls were used as housing for the Japanese families, which usually consisted of 5-6 people per family. These were awful conditions for anyone to be subjected to. When they wanted to eat, they had to bring their dishes to the grand stand and wait in outstandingly long lines.

A year after coming to the camp, the government built other relocation centers, one called the Tanforan Assembly Center, which Hirose stayed at. By this time, Hirose was a freshman in high school, and there were sports leagues between the different camps. This was a form of freedom for the intended people. Hirose explained that his team was the worst and that they did badly in just about every sport, because all of the other kids were much taller and larger.

Hirose ended up graduating from Topaz High School, the high school that was run through the internment camp. After he graduated, he was assigned to work in the boiler room at a hospital, cleaning blood away after surgeries. His father worked in the pig farms just outside of the hospital.

Once the war ended, each family was given $200 and told to go back to where they came from before the war. However, a majority of people’s homes were now occupied by other families. Some were lucky enough to be able to reclaim their houses; some had friends to watch over their properties or businesses while they were gone.

When Hirose was 19, he was moved to a prisoners of war camp, which is where he received a draft notice to go fight in Germany. When World War II ended he moved to Berkeley, got a bachelor’s degree, and taught for 23 years until he retired in 1993.

When Japanese Americans were told to relocate, there was no trial, they were simply forced to move out and when they returned, they had nothing.

Some left that place very angry and upset, but others were not. One person Hirose discussed got an architecture degree and became the state architect of Wisconsin.