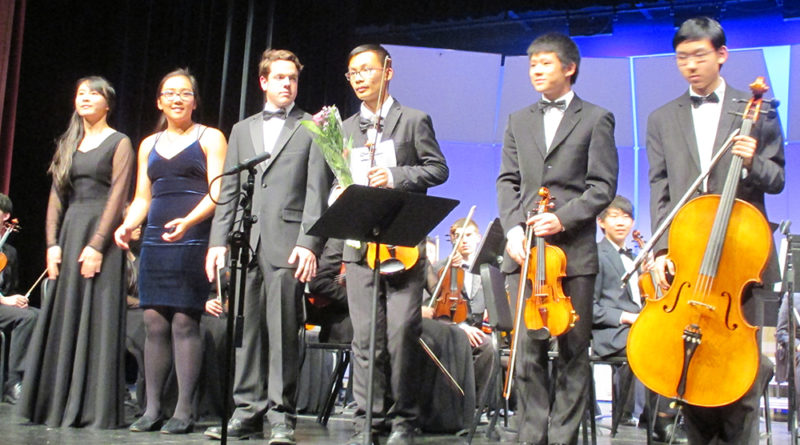 CVHS’s most talented instrumentalists performed a concerto, a very high level solo instrumental piece played with an orchestra, on April 7 in the CFA. This year six performers, Gabriel Priem, Kaitlyn Li, Nicholas Chan, Lotan Yeung, Jessica Mi, and Jimmy Ouyang all performed quite complicated pieces. The pieces were by famous classical composers such as J.S Bach, Beethoven, and Mozart. Soloists played a variety of instruments including violin, piano, cello, and marimba.

Musicians auditioned to be a soloist last November, and have been preparing for almost six months.

“I feel really free and relieved in general…I think I did pretty well and I’m very proud of myself,” said Li, a pianist. She is a very committed and accomplished musician, as this is her tenth year competing in the United States Open Music Competition and her 11th year in the National Piano Playing Audition.

“All of my hard work was on display, and just felt worth it,” said cellist Chan. He has been in many youth orchestras such as the Dominican Chamber Orchestra and participated in the Jenny Lin Summer Program.

“I am most excited for this concert for being able to see other people who’ve learned the solos and see how much our work has been put into it,” said senior Yeung, who plays the violin. He plans to major in music at University of the Pacific and currently plays in the Oakland Symphony Youth Orchestra.

Gabriel Priem performed the marimba and has been playing percussion instruments for a year, but has also played piano for seven years.

Jessica Mi is a talented musician who has been playing piano for 12 years as well as the euphonium and trumpet in the CVHS wind ensemble and marching band.

Jimmy Ouyang, a junior, moved to the U.S from China three years ago and has been involved in programs such as the Luohu Youth String Orchestra and the Young People Symphony Orchestra.