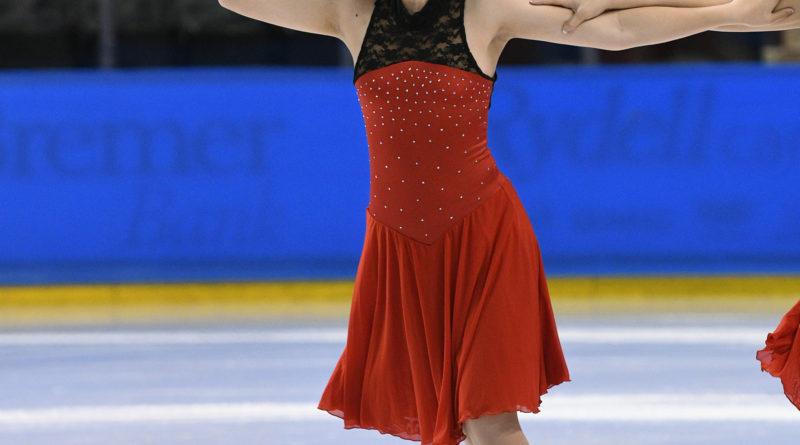 In September 2016, Xie’s long years of ice skating finally paid off when she passed her Senior Moves in the Field test. This is the highest achievement in testing, and she now has earned the title “U.S. Figure Skating gold medalist,” and will carry the title forever.

“It took me eight years to complete it all and I finally made it. Still feels surreal,” she said.

Xie has developed her skills over time by practicing every weekend at 5 a.m.  at Dublin Iceland. She also teaches ice skating to toddlers every Tuesday evening.

Not only did she pass this achievement, Xie and her 12- member team also received the chance to go to North Dakota to compete in the 2017 Pacific Coast Synchronized Sectional Championships.

“When we got there, we kind of scouted our competition. We didn’t judge them or anything, we just like to watch them out of curiosity so we can see how they are,” she said.

Xie has been with Silver Stars since the age of nine. Synchronized ice skating requires a lot of team bonding and trust between each other. Xie has practically grown up with her teammates, and they’ve adopted many quirky traditions with every competition. Before entering the ice, they prepare themselves in the locker by performing certain rituals. However, coaches do try to avoid the sentimental speeches.

Since Xie’s parents didn’t come with her to the competition, they got the chance to see their daughter on livestream. However, most of the people watching were either competing or the judges. To Xie, that was definitely nerve-wracking.

Even though Xie was nervous, she tried her best to keep a performance face on during the show. Her team managed to skate with no falls, which is called a “clean skate.”

After finding out that their team won first place, each member received a gold medal.

“It was one of the most surreal moments. We’re known for being there for each other and not really serious, so when we got the gold it was so unexpected. It was the highest score our team has received in history. No one believed that we could do it, and everyone was shocked that we got the highest score. So yes, we started crying,” she said

Xie is interested in attending an East Coast college, so this fairytale moment and her memories with Silver Stars will always be in her heart.