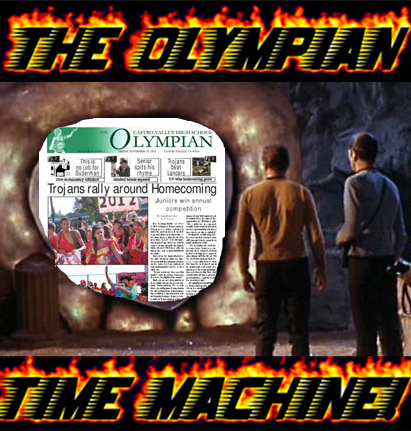 Excerpts from The Olympian archives show the way things were at CVHS.

2006: “Don’t take your license for granted. As I was cruising down the freeway going 80 mph in the fast lane, I lived every driver’s nightmare. The infamous red and blue lights from hell appeared out of thin air and were locked right behind me. I cursed the cop for targeting me instead of the other speeders, but I prayed to my non-denominational god that it was not me that he was following. As I pulled over, the red and blue were still up on me, and an officer approached me and asked for my license and registration.”

Some things never change. People do bad things, and hope they will be the ones who can escape, but they caught by the police all the time.

1996: “Class of 2000 gets P.E. uniform. In an attempt to create a more disciplined classroom
environment, the Physical Education Department announced last week that it will require all freshmen to wear uniforms while participating in P.E. class, beginning in the fall semester of the 1996-97 school year. The requirement will be expanded to include all students beginning in 1997-98 if the first year is deemed successful.”

It is kind of fun to know that 20 years ago, there were no P.E. uniforms at CVHS.

1986: “I don’t have to go. ‘You have to go to the Senior Ball: everyone’s going to be there!’ How many times do the teenagers of America have to hear this cry? It’s bad enough that young people are forced to dress up in expensive clothing and ritualistically take pictures with seven million of their closest friends. But on top of that, we are expected to dance and smile and have a good time!”

You really don’t have to go.

1976: “Seeing Double? While walking around the campus, do you ever see double? Relax, you may not be drunk, but just looking at one of the pairs of twins, we have here at Castro Valley High School!”

I guess teens in the 70s drank alcohol too.

1966: “You can be slave for a day. Don’t be surprised if on April 22 you see a bunch of scraggly girls carrying boys’ book and shining their shoes, for this is all just part of Slave Day subject to administrative approval.”

Seriously, who wants to be a slave anyway? Well, if you do, you really need to go see the doctor.