In early August, I took a morning train from Germany to Amsterdam, expecting tulip fields and arriving to a cloudy, rainy city without a single tulip. Disappointing plant variety aside, I had so many great experiences there that my ten hours in Amsterdam became my favorite part of the summer.

I think the part of my day in Amsterdam that will stay with me forever was my visit to the Anne Frank Museum. Having read Anne’s honest and beautiful diary, I knew her story. But walking through the annex she stayed in, you can feel her presence and truly understand what a tragedy her murder was.

Ultimately, a picture of Anne’s father, the sole survivor of the group, standing alone in the attic his family inhabited during the occupation, was what brought me to tears. I ended up getting it as a postcard because his image would not leave my mind. 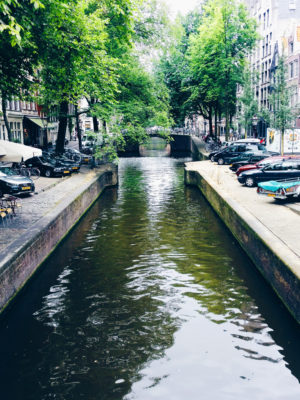 In between museums, I went on a boat tour in the grachten, the webbed canals of the city. Exploring Amsterdam from the water was an interesting experience, and a fun way to learn about the city’s history and architecture, and its many tourist attractions.

The Van Gogh Museum was such a special place to go to. I learned things about van Gogh that gave me new perspectives of looking at his paintings. Unfortunately, I had to rush through the museum to see all of it, but I still managed to discover some paintings that have impacted me. My favorite is titled “Self-Portrait with Straw Hat,” a portrait in which van Gogh’s eyes look at you with an expression of suffering. I bought a myriad of souvenirs, and dashed to the train station.

As my train pulled out of Amsterdam’s main station, I realized that I was leaving with three new things: a collection of postcards, a love for the city, and a desire to come back.