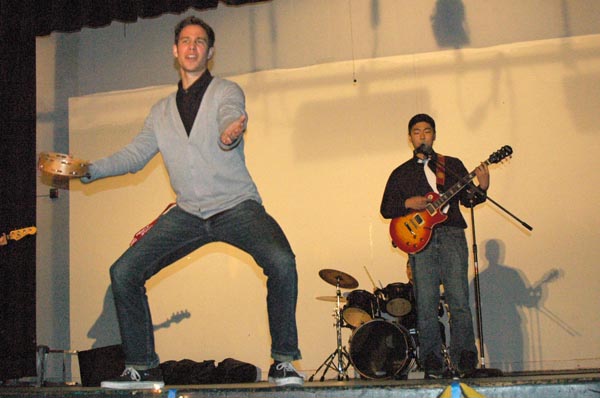 America’s Got Talent may have several talented people, but CVHS is jam-packed with talented students. The annual DECA Variety Show was held on March 11, and this year, special talents ranging from dancing to martial arts filled the cafeteria, leaving the audience in awe.

The lights in the decorated cafeteria dimmed down as the MCs, Kyle Linayao and Holly Talmadge, started off the show. They introduced the first performance, put on by Jasmine Mangabay, who kicked off the show by playing the piano and singing a song by Secondhand Serenade.

The emotional mood then transformed into an upbeat dance as the dance group Mozayicks took on the dance floor.

Upon seeing the talents of a current CVHS student and old faces of CVHS alumni, the audience reacted enthusiastically for the first two performances.

Next was a sweet song sung and played on the ukulele by Mae Muldez, while her friend Brandon Chu sat next to her holding the microphone in front of the ukulele. The audience continued to be in a state of admiration as Chiko Shimizu performed Rihanna’s “Take a Bow.” Taking the stage after Shimizu, was a comical, yet helpful lesson of martial arts taught by Trinity Bustria who also rapped a pirate-themed song called “Hook ‘Em Down.” Following his act was a performance by Kate Kim, who played the piano while singing Alicia Key’s “If I Ain’t Got You.” Kyle Linayao and “the boys,” Alex Largusa and Nat Gilkerson, started the second act with their animated dancing.

They left the audience, as well as the judges, in laughter as Johnny Maxwell took the stage with his original rapping.

Finally, Diana Salnik and Monica Barios captivated the audience with their beautiful dance that portrayed a tragic love story. At last, all the contestants were called on stage for the results. The MCs announced Kate Kim as the winner of the show and gave her a $50 check. The show ended with some performers dancing and having fun on stage while others greeted audience members and took pictures.

“I thought it was great to see some new talent during the show such as Trinity and his karate/rapping and the dancing. I really enjoyed the Bass God, especially Nate Han’s singing or screaming because it was hilarious,” said Ryan Matsumura.

“The boy is a natural comedian,” said Joon Joung, referring to Trinity Bustria.

“My job throughout the planning process was to advertise, decorate, sell tickets, and to make sure that during the show groups knew when there turn was in the lineup. We had to juggle preparing for our state competition as well as for the variety show but we really came together as a group and got it accomplished,” said junior Jessica Woo, who is a member of DECA. “The acts this year were very unique and filled with high energy. I enjoyed seeing such a large diversity of talents from the intense performances from Bass God and Her Posse and Trinity, the Martial Arts Master, to the beautiful numbers from the various singers and dancers!”