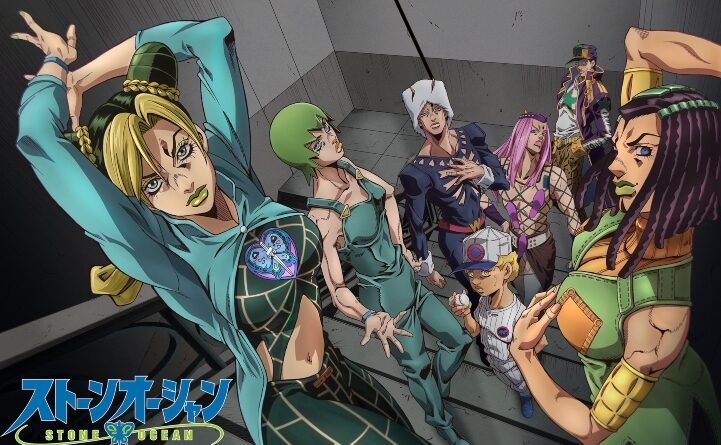 “Good grief, Gwess. You said everything has a name. I’ll name this ability of mine too. ‘Stone Free.’ I’ll become free from this ocean of stones. Did you hear me? Stone Free. That’s the name,” said Jolyne Cujoh preparing to punch Gwess through the gate with her newly awakened Stand.

“Stone Ocean” is the sixth part of the “JoJo’s Bizarre Adventure” series, receiving an anime adaptation for its first 12 episodes in early December of 2021. However, unlike its previous parts David Production made “Stone Ocean” available worldwide on Netflix before it aired in Japan.

Jolyne is held in the Green Dolphin Street Prison in Florida for a murder she was framed for in 2011. Her absent father sends her a family photograph, as well as a sharp metal fragment. Jolyne tosses the trinket aside but not before the fragment pierces her skin. No one else seems to be aware that the inside of her finger is turning to string.

After Jolyne gets into her first fight against her cellmate, Gwess, who shrinks her with the Stand granted from the fragment, Jolyne’s ability fully materializes into a humanoid Stand. As described in the third part “Stardust Crusaders,” Stands are a physical manifestation of one’s fighting spirit. Jolyne later meets other Stand users within the prison, some friends while others foes.

It was thrilling to see Jotaro, the main protagonist of “Stardust Crusaders” and father of Jolyne, make a reappearance along with his Stand, Star Platinum. It also felt nostalgic to listen to soundtracks from “Stardust Crusaders” be reused, as heard in the fourth part “Diamond is Unbreakable.”

David Production made an exceptional opening, as usual, even bringing back CGI which was last used in the second opening for “Stardust Crusaders.” Within the amazing opening stylized to the early 2000s are various references to the previous parts. Each of the five parts is referenced in order when Jolyne’s string forms the star-shaped birthmark, from the Stone Mask in “Phantom Blood” to the Requiem Arrow in “Golden Wind.” Each defining object is a reminder of how the main protagonist of each part is a descendant of the Joestar bloodline, which Jolyne is a part of too.

However, “Stone Ocean” feels rushed as there is a lot of CGI that awkwardly clashes with the animation as they seem to be used in place of some complex backgrounds. In addition, as much as Jolyne’s theme song is exciting, it is also overused and overshadows any other background music. In “Golden Wind” nearly every member of the mafia had a unique theme song playing in the background during their fights. For “Stone Ocean” however, only Jolyne’s theme sticks out during the fights. It also does not help that her theme seems to only have one distinct variation, unlike Jotaro’s theme, “Stardust Crusaders,” and Giorno’s theme, “Il Vento D’oro.”

Overall, I would have been happier if David Production did not rush the animation and music and had taken a few more months to improve the long-awaited season. I will be excited for the rest of the part to be animated, hopefully without excessive CGI this time around. However, I think fans of the series may have lost the little interest they had in “Stone Ocean” and are already enthusiastic for the seventh part “Steel Ball Run,” taking place in another universe.

“No! This is reality! Time stop!” realizes Jotaro as Star Platinum stops the flow of time to pull Jolyne out of the way of incoming bullets.