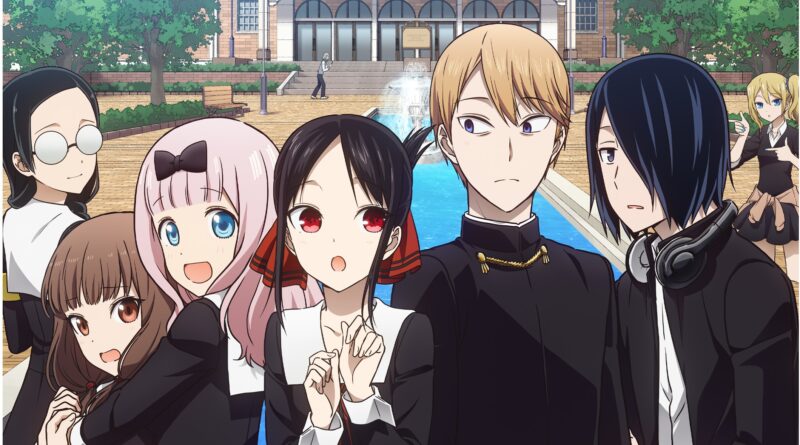 Students gather, peering through windows and from the rooftops. A crowd has surrounded the two, waiting for a confession of love. In the courtyard, the student council president whispers something into the vice president’s ear. She whispers back. They decide to make a run for it, the anxious crowd ready to press them for what they whispered to each other.

“Kaguya-sama: Love is War” aired its second season during the spring 2020 season from April 11 to June 20. Just like its first season, it is 12 episodes long, each with three to four mini-episodes, currently available on Hulu.

At the prestigious Shuchiin Academy, rumors have spread that the student council president and vice president are dating. President Miyuki Shirogane, despite not having a wealthy background, worked his way up, earning top grades in his entire class. Vice President Kaguya Shinomiya, a trillionaire (in terms of Japanese yen), is talented in various activities and has many businesses under her family name.

Both Miyuki and Kaguya remain prideful and refuse to admit their love for each other. In their minds, to confess their love is to admit defeat. Most of the first season is filled with schemes to get the other to confess. However, things do not go as planned, especially when other student council members show up.

The second season picks up right where the first season ended, in the days following the fireworks show. Secretary Chika Fujiwara, the cheerful one, stirs up emotions with her board games, though she lacks the social awareness to notice this. Treasurer Yu Ishigami usually looks depressed and carries his video games around, always weary of the vice president.

A new student council member is introduced in this season. Miko Iino, appointed by Miyuki as the financial auditor, has a strong sense of morality, often berating Yu for his lack of care for his studies.

The psychological battles between Miyuki and Kaguya are not as intense as last season, but their internal thoughts are still amusing. Miyuki often imagines Kaguya pitying him with a condescending smile while Kaguya usually gets lost in her thoughts of romantic situations with Miyuki.

One feature that stands out is the battle result at the end of most mini-episodes. The funniest ones of course mention someone other than Miyuki and Kaguya.

One of my favorite scenes is when Yu whispers to himself something about Kaguya, who then proceeds to firmly grasp his arm while he tries to run away at full force. This actually happens multiple times and makes Yu’s fear of Kaguya more comedic.

I enjoyed watching the comedic scenes for myself. I can definitely understand why this anime is enjoyed so much.

“Kaguya-sama: Love is War” is among the top of the list when it comes to the best openings of 2020, with its catchy opening “DADDY! DADDY DO! feat. Airi Suzuki” by Masayuki Suzuki. On Oct. 25, 2020, a third season was confirmed at an onstage concert.

As the second season comes to a close, an explosion occurs, followed by the opening song, some of the pink smoke forming hearts while the school is turned into rubble. The battle results are invalid, comedically ending the romantic struggle for now.