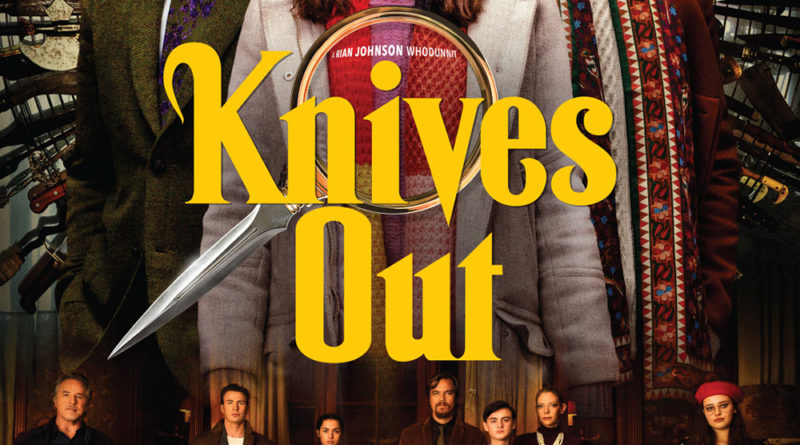 “Knives Out” opens on a shot of an ominous mansion set to dramatic music. A woman carrying a tray of food walks through creaky hallways lined with knives, through hidden doorways, and up to a bedroom. As she enters, the camera switches focus to reveal an old man, laid on a couch, with his throat slit and a bloody knife on the floor.

Rian Johnson, the writer and director of “Knives Out,” is probably best known for writing and directing “Star Wars: The Last Jedi,” the most controversial “Star Wars” movie since the much hated prequels. After its release, he was widely mocked for comments saying that he wanted to “subvert” fans’ expectations with “The Last Jedi,” with many saying the movie ended up unsatisfying. “Knives Out” feels like Johnson’s attempt to prove that a movie that went in unpredictable directions could also be entertaining, and if so, it is successful. The plot sets us up to expect a classic mystery before shifting into a captivating, edge-of-your-seat thriller halfway through.

On paper, “Knives Out” is perfectly in the style of an Agatha Christie book. An aging book writer, Harlan Thrombey, is found dead in his mansion of an apparent suicide and several of his family members have motives to kill him. A private detective, Benoit Blanc, is called in, and with the help of Thrombey’s personal nurse, they attempt to find whether anyone killed him and, if so, who it was. Everything from the elaborate design of the mansion to the final dramatic reveal feels as if it came out of a classic murder mystery. One character even remarks that Thrombey’s mansion looks like the one from the board game Clue.

At the same time, small things poke out to the audience. Thrombey’s nurse has a personal quirk that belongs in a slapstick comedy more than a dramatic mystery. Similarly, the large cast of characters leaves a few of them without much to do. Still, the great performances by the entire cast and the gripping plot draw viewers in and make for an ultimately great movie.