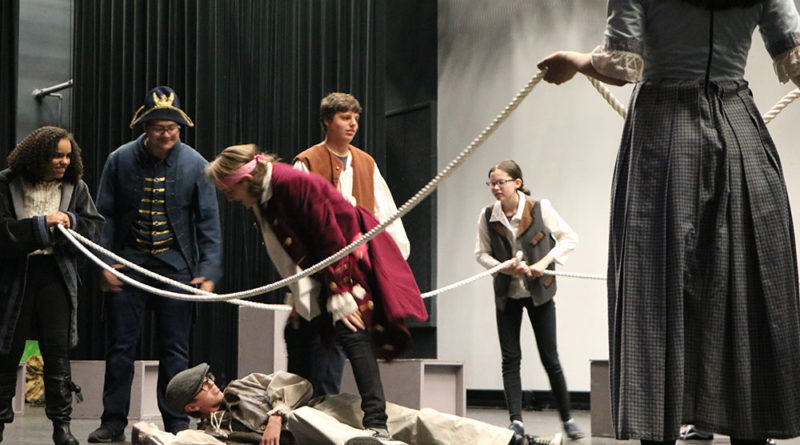 Swashbuckling pirates take over the ship, The Neverland. A huge fight occurs, Captain Stache faces off against Slank, the man in charge of The Neverland, mermaids sing and dance while the Mollusks, natives of the island, capture the group of orphan boys. There’s a huge storm, and a chase scene. Boy, one of the orphans who has no name, decides to name himself. “There. I’m Peter Pan,” he says.

“Peter and the Starcatcher,” directed by drama teacher Tiffany Daily, is a play about the orphan boy, Peter Pan, his new friend Molly, and two other orphan boys, Prentiss and Ted, the main lost boys. The group goes on a quest in order to keep the chest full of starstuff away from the sinister and evil Captain Stache. The play is a prequel for the beloved story of “Peter Pan.”

The play is full of intricate outfits of the pirates, ship crew, orphan boys, native tribes, and mermaids. A clever use of props and lighting allows for the magic of the play to truly come to life. The elaborate scenes of the play show the hard work that the drama students and teachers put into the play.

“The directors put their hard work into the show and teaching us all the blocking for each scene,” explained Gaby Pinto, who plays Molly.

Emma Trujillo, who plays Boy/Peter Pan, appreciates and gives credit to the directors of the play as well.

The students also put in a lot of work. They rehearse almost every day after school for several hours to make sure that they are ready for their opening night.

“You are there almost every day of the week reviewing scenes, working on your lines, and getting them memorized,” Pinto said.

Since the students are there for so long, they become close and build strong relationships with each other.

“I build a great relationship with everybody in the cast. I have good chemistry with them when I act,” said Pinto.

Trujillo also loves the relationships that come with putting on a play. It is her favorite part about putting on the play.

“It’s the love and adoration of the cast and the support of the directors and crew,” Trujillo said.

“Peter and the Starcatcher” is a fun show to watch with the enchanting scenes, amazing acting, and beautiful sets and costumes. There are also several pop culture references, so the audience must pay attention in order to catch them!

“One thing unique about this production is the use of simple props and lighting effects to create a highly theatrical experience. For example, when two ships are being tossed and turned in the ocean during a storm, the audience will experience it in a highly metaphorical and stylized way that is quite exciting,” Daily explained.

The play will be held in the Center For the Arts at 7 p.m. on Nov. 8, 9, 15, and 16. Castro Valley residents and students of CVHS should definitely go and support the drama students of the high school.

“This play is riveting and humorous. It’s very entertaining and highly enjoyable by many,” Trujillo said.

Be sure to catch “Peter and the Starcatcher” at the CFA. It is a magical show that you wouldn’t want to miss.

“This is a great show for everybody. It draws on familiar characters the audience already knows and loves Peter, Smee, Captain Hook from the Peter Pan story and provides a comic and highly entertaining storytelling experience with humor and music,” said Daily.