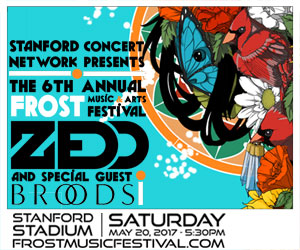 The festival has traditionally been an electronic music festival at Stanford University’s Frost Amphitheater, but will be moved to the football stadium this year because of renovations on the amphitheater. Previous headliners of the festival have included Fetty Wap, Flume, Dispatch, MGMT, and Modest Mouse.

There is no doubt that Zedd will be a performance to remember. The Russian-born German producer will perform a set in which he mixes music from a pre-determined set, using special tools to alter the sound and create special musical effects. The show will be paired with stunning graphics on a huge screen to enhance the musical experience.