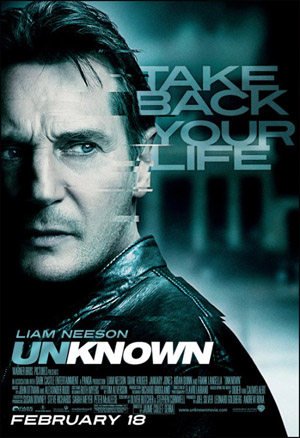 Unknown is an action-packed movie that has some aspects of the mind games that encompass Shutter Island and Inception.  It lets your mind make many assumptions that will not be suitable to the storyline, as the plot takes numerous twists and turns to keep you on the edge of your seat. This movie, rated PG-13, arrived in theaters Feb. 18, just in time for viewers to ponder its magnificent plot over the three day weekend.

The drama and mystery/suspense film was directed by Jaume Collet-Serra.

Unknown begins as Dr. Martin Harris (Liam Neeson) gets involved in a fatal car accident in Berlin, Germany. As he searches for his wife (January Jones), he finds that she fails to recognize him and that she is claiming another man to be her husband.

Harris has to overcome many hardships and obstacles with the aid of Gina (Diane Kruger) to prove his identity.  He has to stay firm in proving his identity because everyone else around him is treating him as if he was mentally impacted by the accident.

Overall, the movie kept me guessing at what was going to happen next and kept developing into a deeper and deeper storyline. I was sitting on the edge of my seat throughout the whole movie and was constantly hit by intense car chases and fight scenes.

Unknown is a well-rounded movie that stimulates the brain and leads to a night of problem-solving and pondering. Everyone who admires action movies with just the right hint of drama should take a trip to the theaters to see this movie.