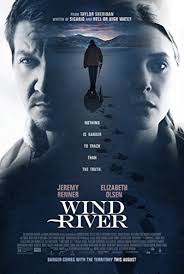 Imagine running for six miles in thin clothes, in freezing cold snow in the dead of night.

Imagine doing that scared, beaten, and sexually assaulted. Then after doing all that, only to die, because your lungs have burst and you’ve drowned in your own blood. That is the story of the new movie “Wind River.”

The movie takes place on the Wind River Indian Reservation in Wyoming. It follows wildlife officer, Cory Lambert, and FBI agent, Jane Banner. Cory discovers a dead woman’s body in the snow frozen solid. Jane is called out to the reservation to investigate. With Cory as her guide and along with the local police, they work to find out what really happens and along the way the investigation takes many twists and turns.

The acting in this movie is phenomenal. I am used to seeing Renner as the funny parental figure who kicks ass in Marvel movies, but in this film he deviates from his usual role. He becomes this strong, stoic figure, who’s wise yet also kind and compassionate. Olsen undergoes the same change in this movie. I think of Elizabeth as the sorceress from the Marvel movies who is strong and powerful, but an outsider because she is dark, grim, and suffers from her own inner turmoil. In “Wind River,” she does an excellent job of playing the role of an inexperienced FBI agent, who demands a presence. She is still an outsider in this movie, because no one takes her seriously and she’s not a local with the natives on the reservation.

This movie is filled with suspense and is actually quite sad. One of the most memorable quotes from the movie was when Cory was talking to the father of the dead girl. “I got some good news, and I got some bad news. Bad news is you’ll never be the same again and you can never replace her. The good news is that once you accept that and let yourself grieve, you’ll remember her and love she gave you,” he said.

The movie isn’t mainstream or as well known as other movies, but it is one of the best to come out this year. I highly recommend people go to watch it. I give this movie a 5/5 stars.