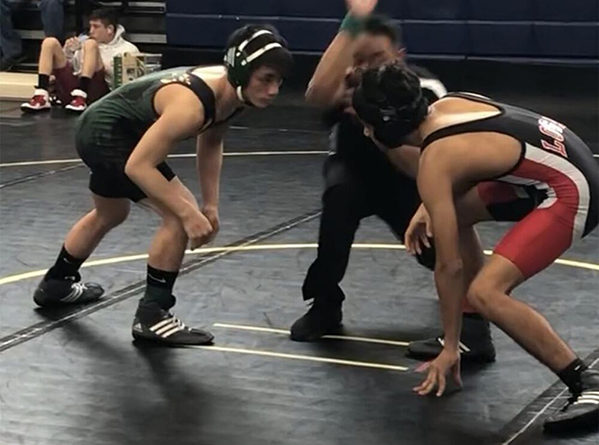 Bringing home the victory for the Trojans at a nearly-tied dual meet, Austin Chan wrestled well in the last match, pinning his opponent, with a score of 11-1.

Chan started wrestling last year after suggestions from a couple of his friends, and in only his second year, he has earned a spot on the boys varsity wrestling team.

His success, he says, was dependent on having to overcome his weaknesses. “I’d gas out a lot, but I kept practicing and got faster and faster. The idea that the pain is just momentary, and that after the pain comes the reward of being just a tiny bit better, motivates me,” said Chan.

Wrestling has helped him become more committed to something and made him want to work harder to stay in shape. In addition to practices, he’d go on runs days before competitions to guarantee that he’s on weight, or fits the appropriate weight class, and maintains that weight by cutting down food intake.

“Dedication, pride, and sacrifice are definitely the main traits and characteristics a great wrestler should have,” he said. “You must be dedicated when wrestling, thinking about only wrestling, and not letting other things get in the way. This also connects with sacrifice, because you need to sacrifice a lot of time and foods you like in order to be in the right weight class.”

The best wrestling advice Chan has received was from his coach, telling him to push through the pain, because the moment that he steps into the circle is the moment that defines the next six minutes of his life.

He loves seeing how much progress he has made over the past two wrestling seasons, and how it pays off when he wins his matches.

Chan strongly disagrees with people that don’t view wrestling as a sport, or an inferior or weird one. “Wrestling is definitely a very difficult sport. It takes a lot of work to become a good wrestler. Many people see wrestling as weird since there is a lot of body contact, but it’s not weird unless you make it weird. It’s a sport like every other sport. You need to work extremely hard to stay in shape and get better at wrestling,” stated Chan.