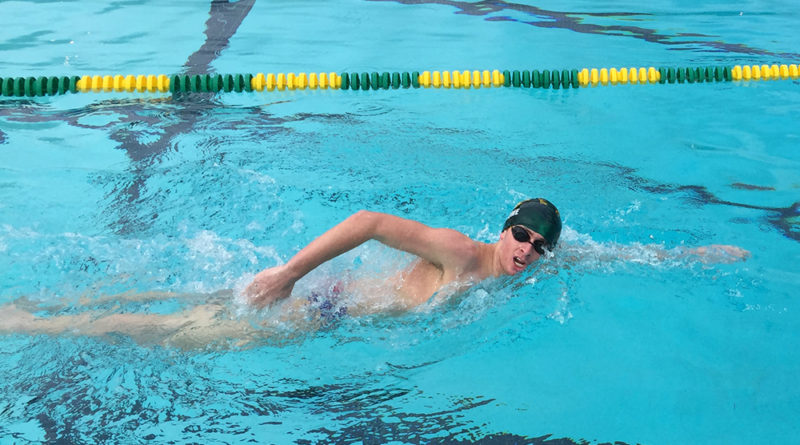 Freestyling down the lane, five seconds quicker than his competitors, Andy Jerome placed first alongside the rest of his team, the Chabot Marlins. Having swam for the past ten years, his favorite memory is winning his first gold medal at the age of 12.

Aspiring to be like his mother, Jerome took up the sport when he was six and continues to love it to this day.

“Swimming is a sport that I’ve really grown into. It has given me confidence and it has allowed me to form a great group of friends,” said Jerome.

Not only has swimming introduced him to lasting friendships, but it has also advanced his perseverance and escalated his “never give up” mentality. Jerome was never the fastest kid growing up, but has never stopped aiming to improve himself.

Last year, his unparalleled performance at the championships landed him a spot at the North Coast Sectional (NCS) competition, a tremendous honor.

He doesn’t let his achievements go to his head, and simply continues to better himself every day. Recently he swam his longest distance, 500 yards of freestyle. That’s 20 laps!

“Everyone thinks that swimming is the easiest sport ever, but it’s not,” said Jerome. It requires dedication, patience, and perseverance. In addition, swimming has benefits that extend beyond other sports. “It’s life-saving in case you’re drowning,” added Jerome.

Jerome is in the pool for at least two hours each day for ten months of the year, with only two months of rest. That explains why he already has numerous varsity letters, placing on the varsity swim team every year since freshman year. In addition, he has also played on the varsity water polo team.

Teammate Luka Uchiyama guarantees that his goal to get the Herculean Award (for seven varsity letters) is attainable.

“He’s very persistent and hard-working. He practices so hard that I get splashed every time,” Uchiyama commented.

2 thoughts on “Jerome proves that hard work pays off”