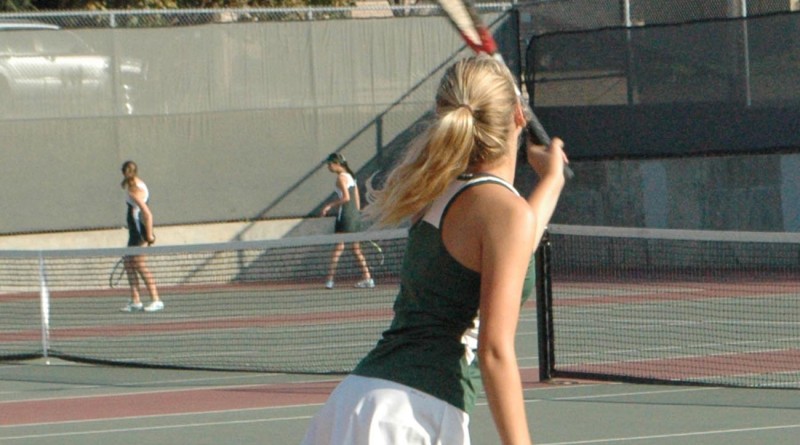 The Trojans’ girls varsity tennis team beat the Alameda High Hornets in a close match Oct. 27 to bounce back from a tough loss against the Oakland Head Royce tennis team two weeks earlier.

The result of the match is as follows: the singles games resulted in two wins, with Rachel Dong as the victor for one and Angela Ho for another. CVHS earned two additional two wins by the doubles teams of Brianna Wong and Victoria Vitton also Riley Powers and Anjali Baht.  The final conclusion of the match was an absolute victory by our Trojans with a score of 4-3.

Ho prevailed in a tough singles match, dropping the first set only to rebound in the next two. Powers and Baht also fought to a marathon victory in three sets, the last ending in darkness by a 7-6 score.

“It was nerve wracking because we were splitting sets, so we didn’t know who was going to win. Angela played really hard, and Riley and Anjali played really well too,” said teammate Aditi Gupte.

“No words can really describe how much mental and physical determination it took to bring these matches home,” said a proud Coach Greg Lowe.

The victory eased the disappointment of a close loss to the Head Royce Jayhawks on Oct. 14.

In that competition, singles players Victoria Vitton and Dipti Gupte won matches for the Trojans, as did the doubles team of Emma Metchette and Sylvia Dang. Yet the Jayhawks pulled ahead and ultimately won the competition.

The Trojans tasted defeat, but the environment was peaceful. It was a competition in which there was compassion towards both fellow teammates and competitors. If a mistake was made, you only heard calm responses such as “It’s okay” or “Oh, don’t worry about it,” and never heard words of discouragement.

“I look at the players and see what these girls are capable of, and when they mess up, you know that they still have potential to do more,” Lieu said.

The Trojans are aiming for a strong WACC finish on Nov. 6-7.