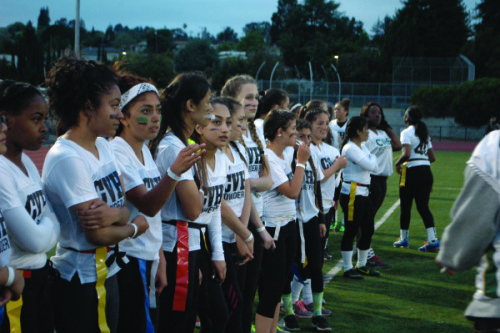 Masses of students and parents alike flocked to the Trojan Stadium to watch the highly anticipated Powderpuff football game on May 22. The sophomore/senior team faced off against the freshman/junior team for an opportunity to win the coveted Powderpuff champion title.

Gabrielle Dionisio, a sophomore, scored the first and only touchdown of the game towards the end of the first quarter. The sophomore/senior team then opted for a successful two-point conversion, ending the first quarter ahead at 8-0.

As the game entered into the second quarter, the competition grew even more fierce. The freshman/junior team fought to make up the touchdown deficit, but were unfortunately unsuccessful.

The audience received a break from the intensity of the competition at half-time with a dazzling performance from the CVHS Spirit Boys. They danced, shimmied, and jumped their way into the audience’s hearts to tunes like Nicki Minaj’s “Anaconda.”

Yellow flags were flying as the game grew more physical throughout the last two quarters. As the fourth quarter drew to a close, the sophomore/senior team maintained their lead, and ended the game with the score of 8-0 achieved in the first quarter.

The sophomore/senior team was ecstatic that their hard work had paid off. The team rushed into the field and burst into chanting and cheers

“I feel great. This is awesome. I really didn’t think winning would be this exciting,” said sophomore Late’jah Whittaker.

The freshman/junior team we excited as well, they played a great game and had fun while doing it.

“Honestly, I’m not disappointed. Working with freshman was not bad, even though they’re new. Through out the game, that score so stayed tight, I am proud of my team,” said junior Koko Dhillon.

No matter the score, the purpose of Powderpuff is to introduce students to new experiences and have fun. “There are a lot of people that I’ve never seen at this school, but I get to meet now, and it get you moving and keeps you active which is good for you. It’s a lot of fun, I’m glad I did it,” said Whittaker.