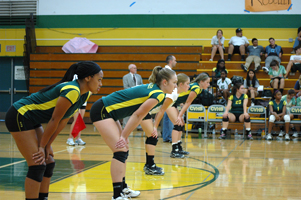 Sports
October 2, 2012October 18, 2012 Eva Chen 0 Comments Arroyo, bay, east, freshman, girls, player, spike, top, Trojans, volleyball, win
Cheers echoed throughout the gymnasium on Thursday, Sept. 26 as the CVHS varsity volleyball team won their seventh consecutive game of the season. The Trojans played Arroyo High and the CVHS girls won three out four matches and barely let Arroyo get a hit in.
The first match put a shadow over the crowd of CVHS fans, with a final score of 25-22, Arroyo had only won by a very few points. It was only uphill for the varsity girls after that; in the second match Arroyo didn’t even start scoring until CVHS had already had 10 points.
In the last two matches, the Trojans used teamwork, and many successful spikes, to beat Arroyo. The players believe that their strong teamwork is what brings them to win all their games.
“One player won’t make this team great, the whole team will,” said Frank Largusa, the head coach of the varsity team. He doesn’t believe in picking a MVP of every game, because it takes a team to win a game.
Last year, the varsity team lost five of their top players, all seniors who graduated. Largusa found amazing players to replace them with, even an incoming freshman, Maya Shumpert.
“It was slow for us, but we pulled it out as a team because we came together,” stated Brooke Costello, a senior on the CVHS varsity team.  She and her fellow team captain Allie Redman were recognized as top volleyball players in the East Bay.
“Every year we become more of a family,” said Costello.