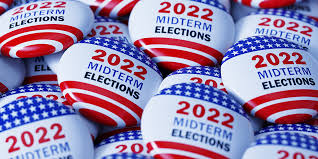 The midterm elections took place on Nov. 8. The Olympian ran a voluntary mock election, which didn’t include all propositions or races; nearly 150 students completed it. The survey results are very reflective of the actual election outcomes.

Reproductive rights were a hot topic across the states this midterm election, and the first California proposition on the ballot was the Right to Reproductive Freedom Amendment — explicitly stating the fundamental right of uterus-having people to reproductive freedom in the California Constitution. 92.4 percent of the polled population at CVHS and the entire Olympian staff agrees with California voters in approving this amendment.

Prop 28 was the Art and Music K-12 Education Funding Initiative. It will allocate 1 percent of the state budget toward arts and music in all CA schools. One hundred percent of The Olympian would support Prop 28 and 85.5 percent of CVHS students also support this proposition. Since it passed in the midterms, schools will be more equipped to run arts and music programs.

The income tax for residents who make above $2 million for Zero-Emission Vehicles and Wildfire Prevention is Prop 30. It states that it would create a greater infrastructure for environment-oriented causes by taxing the rich, which is important. However, because rideshare corporation Lyft funded the proposition, The Olympian was concerned that this money will be going to the wrong places, instead of toward green vehicles. Around 65 percent of CVHS students are supportive of this. However, since it didn’t pass in the election, general tax funds will not be diverted from schools for this questionable initiative.

The last state proposition we looked at was Prop 31; Flavored Tobacco Products Ban Referendum. The Olympian supports this initiative with 83 percent approval, even though we have concerns about a ban engendering an underground flavored tobacco industry. Similarly, 85.3 percent of CVHS students voted in favor of the proposition. This proposition passed in California, so tobacco companies will not appeal to youth in the same way.

There is one county ballot measure–Measure D: Floor Area Ratio Measure, nicknamed “Save Agriculture and Open Space Lands”–which CVHS is split on, and The Olympian is 37.5 percent in favor of due to uncertainties surrounding potential impacts. Voters approved it, so wineries and equestrian lands will have more freedom with their space.

Liz Ortega and Shawn Kumagai–State Assembly District 20 candidates–represent the typical election; labor versus business, respectively. CVHS students are split between these candidates, but Kumagai won The Olympian over. Unlike The Olympian’s vote, Ortega will represent District 20 as the electorate’s choice for Assemblymember.

The District Attorney election was between Pamela Price and Terry Wiley (the expected “tough on crime” candidate.) CVHS and The Olympian favored Price by nearly a two-thirds vote, because we were concerned that the tough-on-crime approach has been proven to be racially motivated, resulting in more populated jails. However, Alameda County elected Wiley in a close race.

Finally, CVUSD school board had two seats up for election with three candidates running; Tina Sachs, Sara Raymond, and Gary Howard. While The Olympian supported Sachs and Raymond, CVHS students and Castro Valley voters were nearly aligned in percentages voting for Raymond and Howard to take the seats.

The results of the election in comparison to student opinions reflect the priorities and needs of citizens in our changing society.