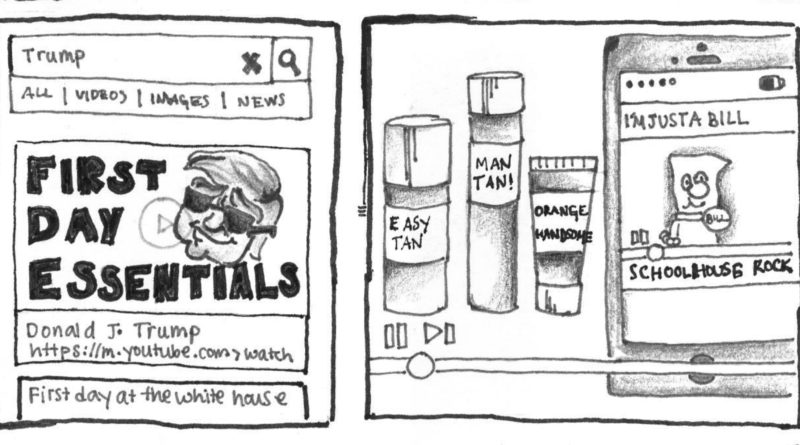 We at The Olympian are shocked and sickened by the results of the 2016 presidential election. Republican nominee Donald Trump won with a huge electoral lead over Democratic candidate Hillary Clinton, despite Clinton winning more than 2 million more popular votes.

As upsetting as this outcome has been, we must focus on moving forward and doing everything we can to protect ourselves and our peers. There have been protests across the country and even on our own campus. We believe that while these protests are successful at demonstrating our outrage, they will not un-elect the president. The democratic process that exists in our country has allowed a man such as Trump to become its president, and we must accept that.

The Olympian is also concerned with the amount of power the Republican Party currently holds in our government. Republicans have taken a majority in the Senate and House of Representatives, and there is an open seat on the Supreme Court for Trump to fill with the Republican judge of his liking. With such an overwhelming majority, we are concerned about abuses of power, as the system of checks and balances may fail when one party controls all three branches of government.

Despite all this despair, we find comfort in the thought that this election has given us an opportunity to fight for the things we believe and shape our future. We at The Olympian advocate for the rights of immigrants, minorities, women, LGBTQ+ individuals, and anyone else that Trump chooses to oppress. We urge students to stay united and work together to support our peers.

We look forward to the 2018 midterm election for Congress in hopes of evening out the balance of power. We find some things fundamentally wrong with the election process, such as voter discrimination and the Electoral College. It is an instrument of minority rule and outdated system that should be abolished, as it has now deprived most voters’ of their choice for the second time in our lifetime.

In conclusion, Trump has won the presidency, and we must be prepared for what is to come. We are at a pivotal point in history: nothing like this has ever happened before. As high school students, what we do in these next few years as we graduate and become young adults will greatly affect the world. We must be ready to stand up for what we value.

We encourage students and all Americans not to give up, but to get involved.