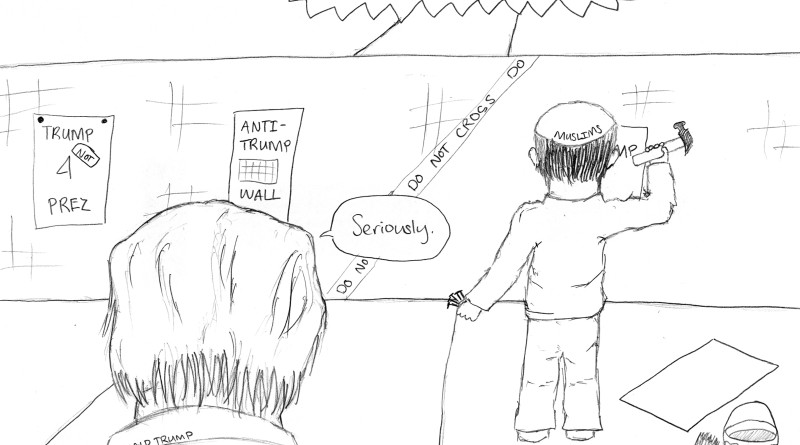 Castro Valley is a town that is landmarked by the Three Crosses Church, known by both locals and passersby. Although this iconic display shows the prevalence of Christianity in Castro Valley, this town is also home to people of all other faiths including Islam. We at The Olympian always welcome people of any faith to Castro Valley, and hope to make them feel welcome.

In the wake of the Paris attacks, in which left about 130 people dead, and over 100 injured, along with the San Bernardino shooting that left 14 people dead and about 20 injured, Islamophobia or anti-Muslim prejudice has become  a widespread topic. Presidential candidate Donald Trump said about Muslims, “They’re not coming to this country if I’m president. And if Obama has brought some to this country they are leaving, they’re going, they’re gone.”

Trump’s comments were followed by increased support from Republicans, but we at The Olympian find this bigotry intolerable. Not all of the Muslims in the U.S  are part of the Islamic State of Iraq and Syria (ISIS). In fact, extremists are only a small faction of the Muslim population. Those who say or believe otherwise are not using logical or sound thinking, but speaking and acting out of fear.

Although in Castro Valley we may believe that Islamophobia is not a big problem, anti- Muslim prejudice has surfaced in our town. For example, local resident Denise Slader apparently verbally and physically attacked a group of Muslims who were praying at Lake Chabot. “The Allah that he was praying to right there in the park openly is not of God, it’s of the devil,” she said later in an interview with KTVU. Slader’s comment was purely intolerant, and her actions show hypocrisy for Christians pray in public often as well.

These actions of intolerant people towards Muslims reminded us at The Olympian of the prejudice held against Japanese Americans in WWII. Not only are these actions and words morally wrong, they are unconstitutional, for the Constitution sanctions freedom of religion.

We have also pondered on how we can create a more tolerant community. CVHS already teaches about the history of the Middle East, the religion of Islam and the civil rights movement. We hold Days of Diversity every other year. Perhaps we can teach students from a young age about tolerance and empathy, or simply to ensure that students are aware of the religion of Islam.

We at The Olympian believe that people should simply try to get along and respect what others believe. Not everyone is going to agree on the same subject, so we simply need to be respectful and tolerant of others’ beliefs.

One thought on “The Olympian opposes anti- Islamic prejudice”