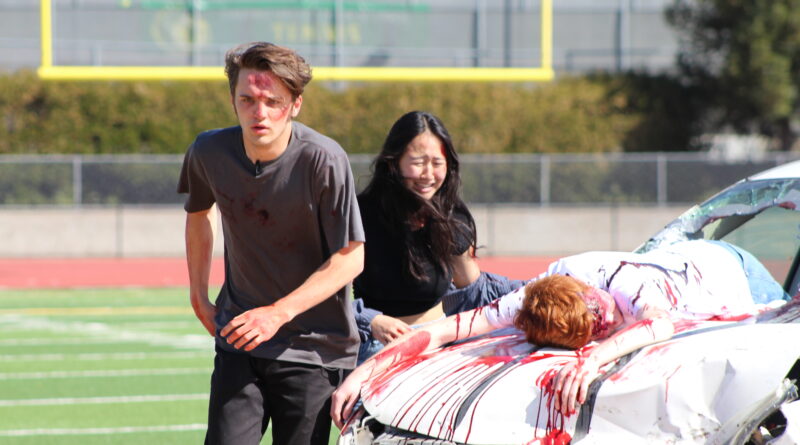 A car accident on March 24 involving seven CVHS students on Crow Canyon Road led to the deaths of two students and left several students injured. The two vehicles collided when one of the vehicles was going the wrong way at high speed. The driver of one of the vehicles was arrested on the suspicion of a DUI. First responders rushed to the scene, freeing victims from the wreck and treating them at Eden Medical Center.

“I cannot believe this is happening in Castro Valley. It is really a shame,” said a first responder on the scene.

Fortunately, the car accident aforementioned was a mock accident put on by students and emergency responders for the Every 15 Minutes program. The two-day program showed students the consequences that follow driving under the influence. Many local agencies participated in the program, including the Alameda County Sheriff’s Office, Alameda County Fire Department, Mothers Against Drunk Driving, and Eden Medical Center.

The program started with students’ and teachers’ names who have “passed away” being announced every 15 minutes over the intercom. Participants were pulled out of classrooms and a rose was placed on their desks. Obituaries of those who passed were placed in the middle of the quad. This was to simulate how a death caused by drinking and driving can affect the school community.

Later that day, students were greeted by a massive car wreck in the middle of the field in the stadium. Multiple victims of the accident were stuck inside the cars, and bodies laid amid the destruction. The fire department arrived, making a loop on the track and into the scene. Using the jaws of life, firefighters removed the roof to one of the vehicles, freeing two victims.

Senior Zachary Furber-Dobson, playing the drunk driver, did a breathalyzer test with Officer Dan Jacowitz. Furber-Dobson was handcuffed and taken away in a CHP vehicle.

On the second day of the program, a “memorial,” was held in the CFA. A coffin was placed in the middle of the stage, with those who had been pulled out of class the day sitting alongside. Speaker Marcella Gomez spoke of her experience of being in a crash caused by a drunk driver.

“No amount of punishment for the drunk driver will ever make up for not having Mom and Dad,” said Gomez.

“The coroner told me something that I cannot get out of my head, that I was one of the lucky people to get on this table and be able to get off of it,” said senior Keagan Shirley.

“This was a really amazing experience and being a part of something that could save at least one life is all that matters to me,” said senior Jake Zakas.

A video showing the accident and court hearings ended the memorial, showing students the long-term consequences of a choice to drink and drive.

Since the program’s inception, deaths from drunk driving have lowered, now occurring every 52 minutes. The event brought up many emotions from students even though it was just a simulation, making a lasting impact on students.

“Be responsible. Make good choices because the choices you are making right now are going to affect the rest of your life, who and what you’ll be,” said Jacowitz.

20 thoughts on “Every 15 Minutes warns students”