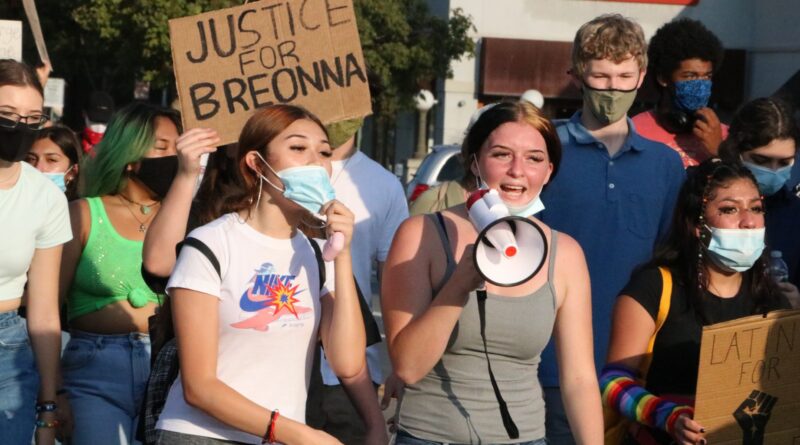 Hundreds of Castro Valley students and community members protested against the death of African American George Floyd and police brutality on June 1.

Minneapolis police arrested Floyd on May 25 on suspicion of passing a counterfeit $20 bill. A bystander captured video of white Officer Derek Chauvin pressing his knee on Floyd’s neck, pinning him to the street for more than eight minutes. Floyd said repeatedly “I can’t breathe” and was pronounced dead an hour later.

Chauvin and three other officers were fired, and Chauvin was arrested and charged with murder.

“We need to stay with our black brothers and sisters. We need to support them,” stated Isis Poulose, a CVHS senior.

The protesters gathered by CVHS and walked down Redwood Road towards Safeway. Many people held signs reading “Black Lives Matter” and “No Justice No Peace!” The crowd was mainly teenagers but there were some adults as well. Protesters chanted “I can’t breathe!’’ and “Justice for George!”

Since the death of Floyd there have been protests across the country. Some protests have become violent, however this one remained peaceful.

“All four police that have harmed George Floyd should be arrested,” stated Sofia Palau, a CVHS junior.

After walking down to the corner of Redwood Road and Castro Valley Boulevard, the protesters sat down in silence for eight minutes in memory of how long Chauvin pinned Floyd to the ground.

Protesters then walked into the intersection of the street and stood there in a group. They stopped traffic and cars waited until they eventually moved.

“Police brutality is an ongoing thing disrupting my community and our community, and I think it’s time we found justice because without justice we can’t have peace,” said recent CVHS graduate Zaria Maloof.