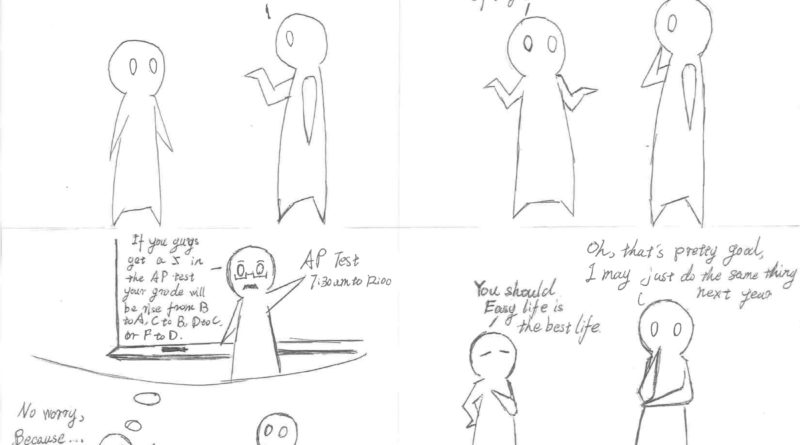 The first two weeks of May are often fraught with anxious high school students studying and taking their AP exams. But some teachers are offering to raise students’ grades based on how well they scored on their AP exams, a controversial policy.

Math teacher Mindy Holmes is against this move. She teaches AP Calculus AB and AP Computer Science, and believes that raising grades for students who take and do well on the exam is unfair.

“I think it’s discrimination,” she said. “You’re essentially paying for a grade. The educational code in public schools is that you shouldn’t have to pay for anything, but students paying around $100 per exam for a changed grade doesn’t seem legal to me.”

Holmes believes that a students’ performance in the class strongly correlates with what score they will receive on the exam, and thus does not believe an extra push or raised grade is needed. “I think I give pretty hard tests, but I also curve whenever needed. Letter grades in my classes tend to match up with AP scores,” she said.

When asked whether she would ever consider raising a student’s grade, Holmes replied, “On a case by case basis. I would have to look at their test scores on everything and see their work ethic in class, but I would never raise their grade based on an AP test.”

On the other hand, history teacher Jeffrey Goldstein, who teaches AP US History, believes that students who usually work hard in class could earn that extra boost provided they follow his rules.

Goldstein looks closely at each student’s performance in the class and offers this grading system as an incentive to do well on the test.

Because AP scores come out in mid-July and all gradebooks close in June, he would then submit forms to the registrar to request grade changes for the students. “This is what I have done for many years. I do not advocate other teachers do it. Every teacher has their own system, and this is mine.”

Assistant Principal Nic McMaster stated that he has not heard of any grade changes based on AP exams, but if there were, the administration might take issue. “This is a practice we do not want to be occurring here. There are potential ethical issues involved when money and grades are linked — even indirectly.”