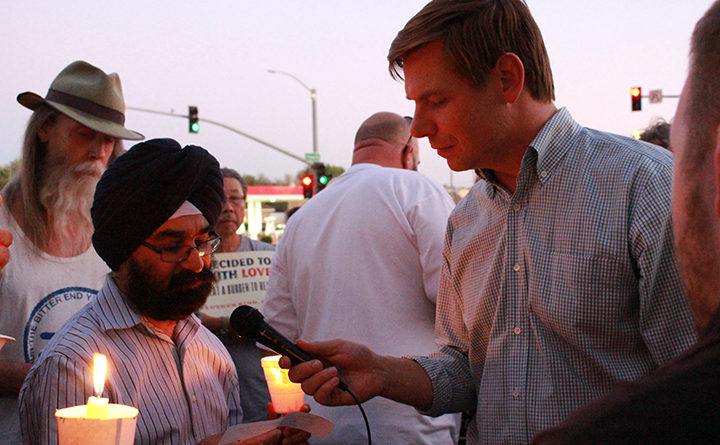 Hundreds of Castro Valley community members gathered together to honor the victims of the Las Vegas shooting at the corner between Castro Valley Boulevard and Redwood Road where Congressman Eric Swalwell held a candlelight vigil on the evening of Oct. 8.

The shooting had occurred exactly one week prior on Oct. 1 during a country music festival. A gunman fired into the crowd from the 32nd floor of his hotel room continuously for several minutes, resulting in 58 dead and over 500 wounded in what is now known as the deadliest mass shooting in modern American history.

Members of the community held candles and spoke about the victims they knew. Reverend Arlene Nehring of Eden United Church of Christ led a prayer at the beginning of the vigil.

“These kinds of occasions, even for people who aren’t particularly practicing a religious faith, raise deeply spiritual questions and concerns and it creates a kind of spiritual wound in people’s hearts as well as their psyche,” Nehring said. Religious leaders from other groups were also present to share some words of reflection.

Swalwell spoke to the public about past public mass shootings and about the Las Vegas shooting. He praised the actions of people in the shooting who did their best to help others. “This shooting, unlike any before, provided over a thousand different perspectives…we saw the best of people, moments after we saw the worst of one person,” said Swalwell.

He invited members of the community to step forward and name victims of the shooting.

“This was an opportunity to call the community together. Someone in our area had been a victim of this and so I wanted to make sure that family saw that there was support for people that they’ve never met before but also express that there is a need for us to do what we can to protect the community,” said Swalwell.

Swalwell also voiced his opinions about what actions Congress should take to prevent future mass shootings. “Congress should act to give people the freedom to live, to be safe from violence. To me that means background checks for those with criminal records and the mentally ill and to make sure that these devices that made weapons fire faster are banned. We must also be allowed to know more when people start to collect a mass amount of weapons in a short period of time,” he said.

However, not everyone approved of new gun control laws. A man in the crowd carrying an American flag expressed his opposition. “People lost their lives, but others should not lose their rights,” said the man, who declined to give his name.