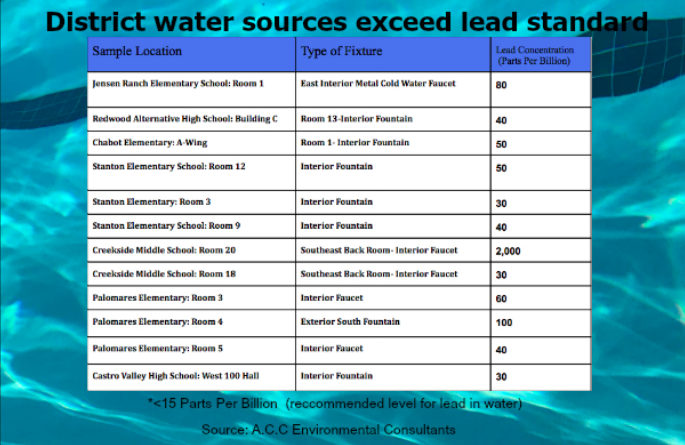 Water from one of the drinking fountains in the 100 hall contained double the recommended maximum amount of lead, CVUSD announced on Aug. 30. A total of 25 sinks and faucets at nine district schools had elevated lead levels according to tests that took place in August.

The district has shut down the CVHS fountain and all the other water sources with excessive lead until they can be repaired.

“We shouldn’t be guessing, we shouldn’t be saying ‘Let’s try this first.’ We just have to shut it all down,” said Superintendent Parvin Ahmadi.

CVUSD voluntarily contracted with ACC Environmental Consultants in August to analyze the safety of the drinking water at Castro Valley schools. After The Olympian requested its report under the California Public Records Act, the district released the test results.

Twelve of the 25 water sources had at least double the recommended lead maximum of 15 parts per billion (PBB). A faucet at Creekside Middle School tested at 2,000 PBB, or 133 times more than the standard, though on a second test, the lead level dropped to 40 PBB.

Ahmadi explained how the district is handling the lead contamination in water fixtures as well as how it intends to pay for the repairs.

“This is not something we can say we don’t have the money for and can’t do it. We have to look at our budget…but regardless it has to be done, we will get it done, and it fits within the purpose of Measure G,” said Ahmadi.

The district has been receiving replacement parts for fixtures to be repaired, however some take longer than others to service.

The August testing involved 300 water sources in CVUSD. A full assessment of all water in Castro Valley schools will follow, Ahmadi said.

The superintendent did not know the last time school water was tested, or if it ever had been.

“It hasn’t been something we’re required to do [in the past]. In fact we do have a board policy that says we need to be doing some of these things that we just adopted in 2016. It’s a new topic of interest… but we always look for any kind of possibly harmful chemicals in all of the work that we do,” said Ahmadi.

The administration announced that bottled water will be distributed to staff and students upon request.

Other water fixtures at CVHS were found to have less than five ppb, well within the range declared to be safe.

“It’s more common than you would think. It probably has to do with the age of the pipe systems. Solder is used to join copper pipes, and there’s a place where that lead can transfer into the water. There could be other things bonding onto that lead oxide in the older buildings,” said science teacher Nathan McCreary.

If lead levels found in water have exceeded the recommended range, modifications or improved installations must be made to that site to ensure safety for consumers. Installing new fountains or components will not eliminate lead completely, but is expected to reduce the ratio of lead to water.