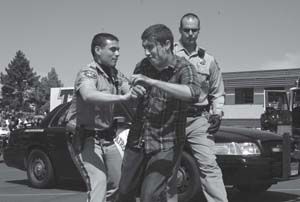 I am not a murderer. I’m not capable of it. I promise, I’m innocent. That’s what I kept repeating through my head to keep my sanity.

I know what a bad feeling feels like, but it never felt this gruesome. I can’t even get the image out of my head— the image of my friends, mutilated, covered with blood, slaughtered, all because of my doings.

I am Igor Breyman, the Every Fifteen Minutes drunk driver, and this was all my fault.

Unique in its design and powerful in its impact, Every Fifteen Minutes is an educational experience funded by an auto accident attorney group that reminds us all of the dangers associated with driving while intoxicated and texting. About 25 students were nominated to participate. Then five or six students were chosen to be a part of the crash scene and in the film. Students are filmed based on a script in jail, court, hospitals, school, and morgues. Though everything is predetermined, the emotions and feelings are all real.

The day of the crash scene, I have never felt so nervous in my life. Even with my various experiences performing on stage, these five minutes of waiting seemed like five days. The illuminated orange world quickly disappeared as the living dead pulled off the tarp. My heart exploded in my chest; I could feel it beating, coursing blood through every inch of my body. Showtime. From there, everything got real and hectic.

The 911-call set off the adrenaline, while the glass, blood, cries, and the fear carried me along. Junior Juan Anderson—paralyzed and stuck—yelled for help in the backseat of my car, while juniors Nate Han and Jasmine Fong were subjects of their own chaotic and painful world stuck in their car. Senior Rachel Wagner and junior Jason Phillips raced on in distress after making the 911 call. Upon seeing the dead bodies of seniors Erin Hawkins and Gabe McDermott, I could feel the emotions rush inside me.

The scenario began when Erin and I decided to pre-game and drink at my house with some friends. Shots of Captain Morgan, swigs of Skyy vodka, and a few games of beer pong were weapons of choice, while Juan and Gabe decided to stay sober.

“Don’t worry dude, I’m fine. I’m Russian, Ukranian, you know I can hold my liquor,” I gently asserted, reassuring Gabe that I was okay to drive. It wasn’t until we started driving that the intoxication hit us. Add in all the distractions and a car as a lethal weapon, and you have a recipe for disaster.

In the moment of impact, Erin and Gabe—both not wearing their seatbelts—were ejected from the car and died on impact. Jasmine, after being rushed to the hospital, never made it out, while Juan was paralyzed from the waist down for life.

The whole duration of this program, I felt as if I was really in the shoes of the drunk driver. The seething hatred I received from various parents, as well as members of the executive and judicial branch, felt real, and it changed my life.

This program has impacted many of us and brought a school together. Hearing sobs throughout the entire theater reassures me we did something meaningful. Every Fifteen Minutes was not just about drunk driving, but about making good decisions, and I feel that countless individuals will now think twice before making a bad one. This program could not have happened without everyone’s support, so thanks to all those at CVHS and elsewhere who made this happen.