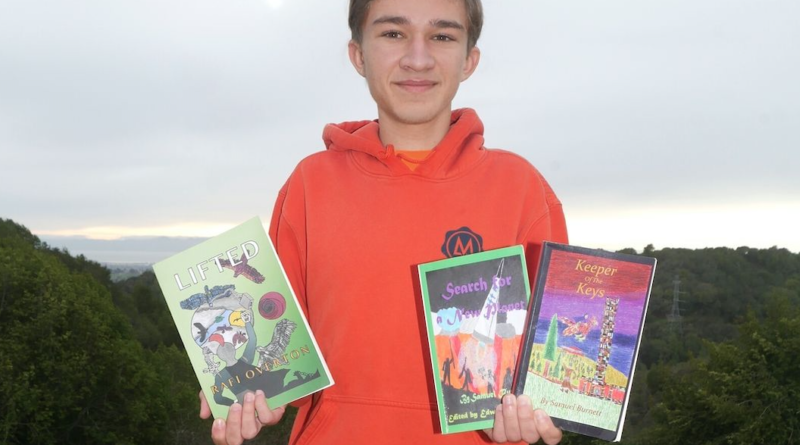 Rafi Overton is a gifted young writer who goes to this school. He’s written and published three books and the most recent one, “Lifted,” was published in the summer of 2020.

Overton, a senior, has been creating stories since before he could write. One day, when he was four, he woke up and he was excited because he had remembered a dream for the first time, so he told his mom about it while she wrote it down. When he was done, she told him that it was a really interesting story and that he should start writing more.

Overton never considered what he was doing was unusual for people his age and he just wanted to tell stories.

“You know, it never really occurred to me that that was young to write a novel. I think I was perfectly aware that most novelists are adults, but I didn’t see why I should wait to be an adult because I had these stories that I really wanted to tell so I just decided to tell them by writing them down,” said Overton.

Overton continued to write stories until 2014 when he decided to publish his first book. The reason he decided to get it published was because he wanted people to hear his thoughts and not just have his books collect dust on his bookshelf.

Overton was so excited to get his book published and out to the public that he didn’t do enough research on publishing companies and ended up paying way too much.

“The first book I really wanted to get it done, so I didn’t do that much research and the publishing company charged $1,000 to publish it. They didn’t even edit it. They just put it on Amazon and that cost $1,000. But we’ve learned that that was an unreasonable price for self publishing and the second two books [which were published with CreateSpace] were completely free and it only cost them money to print it so there’s no reason for them to charge.”

Overton started writing “Lifted” in late 2015. It’s a sequel to his second book, “The Keeper of the Keys.”

When asked if Overton would rather quit school and just write books, he said he wouldn’t because he has other things in which he is interested.

“I actually have lots of other interests other than writing,” he said. “I’m really into science. I do science olympiad and I like being in it, so I wouldn’t want to give up those things, but I also like writing. They’re completely different and I like them for different reasons.”