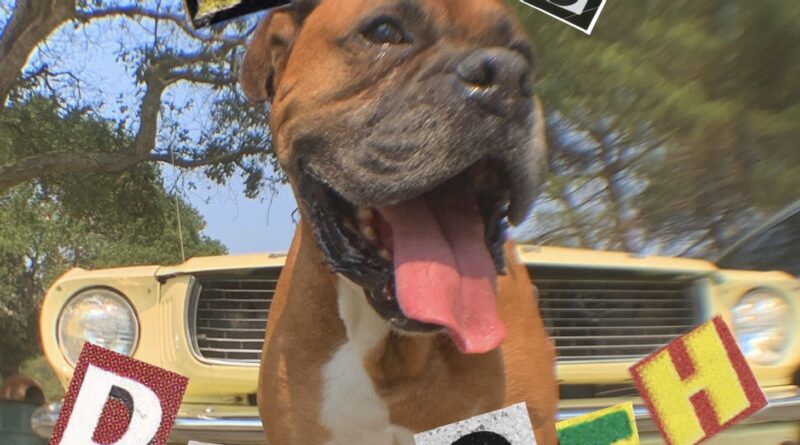 Looking to get into independent publishing? Talk to senior Andrea Mazon about her self-published magazine, “Dog Breath.”

“Dog Breath” is a magazine entirely composed from Mazon’s unique and personal vision along with plenty of artistic contributions. Her first issue “Growing Up On The Internet” is a personal reflection of her experiences with mental health and the psychological effects of consuming social media early in life.

Mazon explained the magazine’s cover image and name. “I was hanging out with a friend and he has a really cool car, a 70s Mustang that was all beat up, and we took his dog out to a walk. On the way back, I was like, ‘Your dog looks so cool sitting in front of your car,’ and I just took a bunch of pictures of him. I was looking at them, and I really liked how it came out when I finished photoshopping them. So, I was like ‘okay, I have two dogs, all my friends have dogs: we can keep this a running theme! Dog Breath, two words, easy to say, that’s the title.”

Even if the subject matter were to change, Mazon wants to make sure that the magazine is still 100 percent her own work.

She believes everyone should have an output to pour their feelings into for whatever they love, and to put that love out there. “Finally having something that felt 100 percent mine and that I had complete control of as my own artistic outlet was one thing I do appreciate a lot. I didn’t realize it until after the first issue. Also, I got a lot of money from it.”

Mazon’s writing is honest and captivating while still holding true to her personality, and the illustrations alongside the artsy photos featured in the magazine are emotionally breathtaking and really sets the mood for the entire zine.

If you’re looking forward to the next issue of Dog Breath, you’ll be pleased to know that Mazon plans to release it early next year.

“I had this idea to do interviews with immigrant girls and talk about how it is to grow up in a country that you weren’t born in,” said Mazon. “I have a very weird perception of my cultural identity, and I thought it would be interesting to interview people who were born from another country and had to grow up white. And so, I had this idea of naming it ‘Growing Up White’ and doing things like photo shoots with all of these different races and girls and nonbinary people that were just dealing with their identity growing up and what they have to say about it. I just thought that these people would have something to say, and they deserve to be heard.”