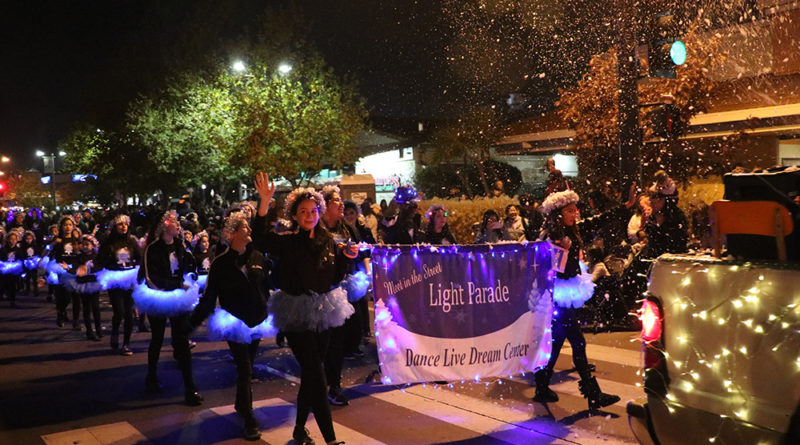 Dancing Christmas trees, a couple of hot rods, and lit up decorations were quite the way to kick off the holiday season as Castro Valley held its annual Light Parade on Saturday Nov. 9.

The annual parade held on Castro Valley Boulevard started with the Castro Valley Market Place and Fusion Dance Project’s “The Nutcracker,” as each team rolled down the boulevard decked out in their holiday spirit. Noise makers and Christmas lights galore, the Castro Valley community showed up, packing the streets to view each team walk the parade.

Next the Castro Valley elementary schools strolled down. Featuring Chabot Elementary with a “United” theme, the Tigers were lit up in red, white, and blue lights as they chanted in unison during the parade.

Other students from Canyon Middle School, Marshall Elementary, Vannoy Elementary, and Redwood Christian showed their spirit as they walked with banners and decorated signs as they lit up the streets.

As each float strolled down with paraders honking horns and waving to viewers, the ever anticipated tap dancing Christmas Trees turned the corner, beginning their routine in their bright green costumes. As the crowds cheered for the tree dancers, the spirit of Christmas and the holiday season was bright.

“The best part was seeing all the happy children in their lights and getting spirited for the holiday season when the floats pass by. I liked seeing the cars roll down in the lights and the dogs dressed up,” said junior Evan Ouki.

The annual Light Parade has been months in the making and was a success, with a large turnout and decorated floats for the upcoming holiday season.