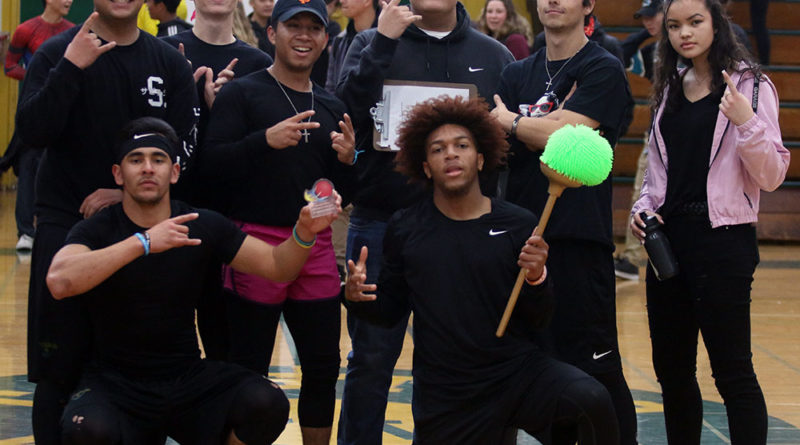 Balls were flying, students were running, and team Broke Lame$ dodged its way to victory in the annual CVHS Dodgeball Tournament held Feb. 26 to March 2 in the main gym. Broke Lame$, dressed in black, won two of three games against their challenger, Quik Mafs. A large crowd was on hand to witness the competition, and a few in the bleachers had to dodge misdirected balls themselves.

There were no extravagant strategies to victory, just the basics, according to Broke Lame$ captain Cameron Taylor.

“We just play dodgeball,” he said. Taylor was optimistic before the game, having won the tournament last year. “We won last year so I think we’ll win again.”

Grant Thomas, captain of Quik Mafs, was less confident, but still had a positive attitude going into the game.

“We’re excited. We’re ready to face a pretty good team… I’m not sure if we’ll win though,” he said.

In the three-game series, Broke Lame$ won the first and Quik Mafs evened things up in the second game. The tension was high in game three, which saw the first player eliminated from Broke Lame$. The team managed to turn things around though, eliminating Quik Mafs one by one until just two were left when time ran out.

“It was an all right game and we faced a pretty good team. There were some iffy calls, though,” said Thomas.

Quik Mafs’ strategy was trying to eliminate the baseball players on the Broke Lame$ team. They wore various sports jerseys except for one player who sported a Spider-man costume.

Taylor credits his success to his team and their optimism.

“We knew we would win. We practiced for about two weeks and we had good chemistry,” said Taylor.