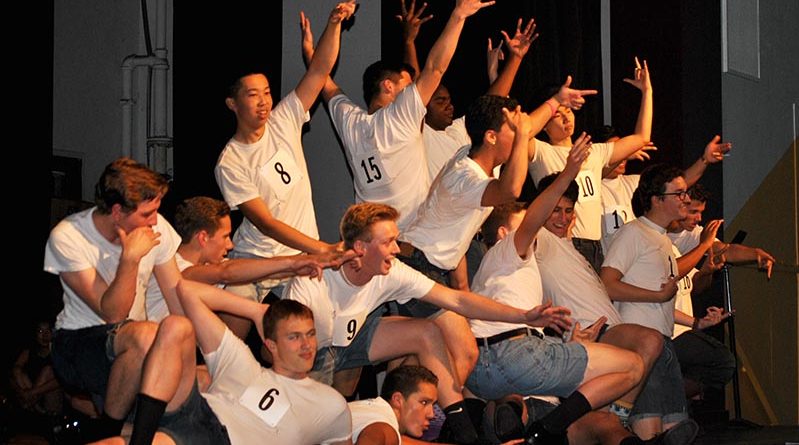 Every year, the varsity cheer team puts on a fundraiser featuring a group of some well-known senior boys who display all their different talents. This year, a group of 17 boys put on a great show.

This year’s emcees Kelly Zoffada and Riley McCullough kept the crowd alive during all transitions by telling jokes, wearing props, and even smashing their heads on hard boiled eggs in search of the single raw egg.

The show started off with the contestants being escorted in by their cheerleader counterparts. Following the introduction, there was an opening group dance before the talent portion began.

The talent portion included a song in sign language, singing, dancing, and some very tight clothing.

Ryan DeCarsky, Spencer Dong, Owen Rempel, Esiason Rodriguez, and Cole Sanders were announced as the top five finalists, and were each asked a particular question in order to please the judges.

Once all the tallies were in, the winners were announced. The People’s Choice was Patrick Protacio who sang “Feeling Good,” which was a real crowd-pleaser. Mr. Congeniality was selected beforehand by everyone who helped put together Mr. CV and was awarded to Sean Rogers. The first runner up was Ryan DeCarsky, who signed a heartwarming tribute to the late Ovida de Julia.

Finally, Mr. CV was announced and Sanders got his rightful crown and sash after his long performance of dancing in a pickle costume. To top it off, he asked his girlfriend to the senior ball in front of the whole crowd; she, of course, said yes.

None of this would’ve been possible had it not been for the coordinator, Eliza Zoffada, as well as many other cheer moms and student volunteers.