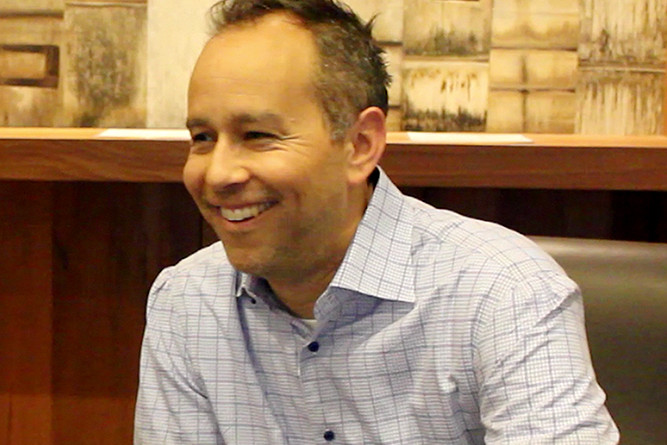 [dropcap]The[/dropcap] stage was set, as many of the most respected people in Hollywood were seated, dressed in formal attire. One could hear the sound of a pin drop at the 88th Academy Awards as the winners of the Best Animated Film award were announced. Jonas Rivera, a 1989 CVHS graduate, waited in the audience in his tuxedo.

Rivera is a kind-hearted and humble man who dedicates his time to producing the movies that shaped the childhoods of many generations. He’s worked at Pixar Animation Studios for more than 20 years.

When Rivera recently took nine CVHS journalism students on a tour of Pixar in Emeryville, he first showed the group a showcase full of Academy Awards won by the studio. But the most treasured item in the showcase, Rivera said, was a doll of the cowboy Woody from the movie Toy Story. The boy who owned it loved it so much that he nearly wore it out. That’s why it gives Pixar’s filmmakers such pride.

Rivera has gone far since growing up in Castro Valley but credits his hometown for helping him achieve success. “The town shaped who I am,” he said.

Growing up as a kid in a small town, Rivera had a knack for show business. “It was 1989, I had long hair, and I played in a rock and roll band,” he recalled.

After parting from his high school days, Rivera stayed close to home during his higher education, which was a major decision that ultimately paid off.

“I went to Cal State Hayward and I ended up going to San Francisco State in a film program there, then I interned for Pixar,” said Rivera.

Surprisingly, in those days, Pixar was not as major as it was today. There were only about 200 employees in a small building with big ideas. Sweeping the floor was one of Rivera’s many duties at first. But he soon graduated to more artistic work on A Bug’s Life, Monsters Inc, Cars and other films. He produced both Up! and the recent hit Inside Out, which earned an Academy nomination for Best Animated Film.

Now one might ask what exactly does a movie producer do? The movie producing process ranges depending on the season of production. The goal is simple: to make the big ideas come alive. Now this may seem simple enough, but when production season rolls around, the thrill of show business takes over.

“When we’re in production I was never in my office, always in a meeting screening room, and technical reviews trying to help the film get made one frame at a time,” said Rivera.

His hard work paid off when both Up! and Inside Out became big hits. Rivera and director Pete Docter worked together on both films. They presented them at the historical Cannes Film Festival, a rare honor for animated films.

“That was one of the greatest honors to be there among all the great cinematic leaders and the great directors of the world,” said Rivera.

Inside Out won a Golden Globe, but would it also win the prestigious Oscar as well? When the announcers called their names at the Academy Awards, Rivera and Docter gushed with happiness and pride. Rivera called it the most rewarding experience of his career.

“At the Academy Awards, with my friend Pete and our wives, I can’t lie, that was the greatest thing I’ve ever experienced, getting to walk up there and grab that thing for Inside Out to represent the crew I worked with,” said Rivera.

That was a thrill, but his greatest inspiration comes from home. “I have an amazing family,” Rivera said. “My day usually starts very early in the morning with my kids William, Elsa, and Eva running into my room and telling me that I have to help them fix the broken Lego toy, or it’s always some crazy thing,” he laughed.

To the students of CVHS, Rivera offered this advice: “If there’s something you love, just do it. A lot of people talk about things but very few do them. Every day that someone waits to start anything is a day wasted… If you love what you do, you’ll never have to work a day in your life.”