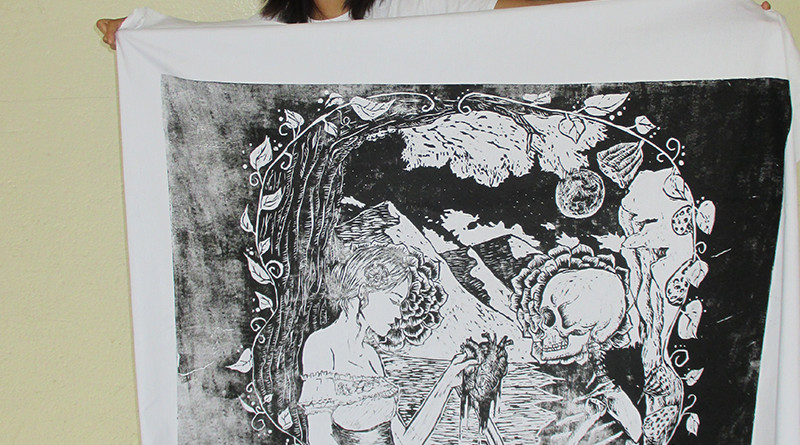 In Mexican culture, Dìa de Los Muertos, meaning “day of the dead,”  is a rich and vibrant holiday that has been celebrated for centuries. On Oct. 31 each year, the streets are filled with brightly painted skulls, an important symbol of the deceased honored by this special holiday.

Inspired by the vibrant Mexican art and moved by the recent deaths in Castro Valley, art teacher Jo Sutton decided to pursue an ambitious art project with the students in her Drama, Art, and Design Academy (DADA) class.

Through a connection to Dr. Irene Landau, a parent of a former CVHS student and a doctor at Kaiser Permanente, Sutton obtained the necessary funding for the project.

For an entire month, the DADA students worked relentlessly on their elaborate wooden carvings, learning new techniques that allowed them to explore and appreciate a new medium of art-making.

The results were black ink printed on the crisp, white pieces of fabric. The artwork featured stories that highlighted the individual stories of the students. Some chose to depict their cats or make a Star Wars-themed print, others stayed true to the traditional Mexican art style.

Sutton had interest for a long time in a printing project, but the challenge of funding it was a big obstacle. Printing presses can cost up to tens of thousands of dollars, so Sutton knew she had to get creative in order to make her plan a realistic option.

Her solution came in the form of a big yellow steamroller, which she used with the help of teacher Richard Schneck to press pieces of fabric against the inked carvings.

The final stage of the project was a demonstration at the Castro Valley Farmers’ Market entitled “Art of the Heart.” The prints were completed in front of a keen group of local spectators.

“Everybody wanted to buy them, which I think is a good sign. But we weren’t really prepared to sell. Because there was so much interest and people were willing to spend money, we are thinking about doing a fundraiser in the future,” said Sutton.

Freshman Rebecca Im created a standout piece that attracted a lot of interest at the event. Depicting a girl holding a human heart, the work well captured the theme of the project.

Im learned how to carve with so much detail that her print looked almost as if it had been drawn by a practiced hand rather than carved out by a beginning carver.

“The kids’ art exceeded my expectations,” said Sutton. “I had kids who were working every single moment I had the studio open. I couldn’t be more pleased.”