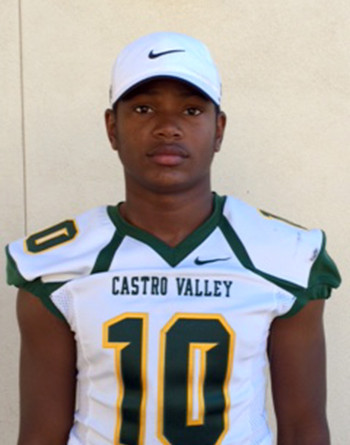 David Taylor is a dedicated athlete with big dreams. Emanating a vibrant liveliness on and off of the field, Taylor is motivated by his plans for athletic success in both football and baseball.

Taylor, otherwise known as D.J., is a junior who has made a name for himself this season as a running back and cornerback for the varsity football team. The athlete started playing football at age seven, and was passionate for the game from the start. Taylor is drawn to football’s fast-paced, intense nature, and lives for the excitement of playing in front of a crowd.

The most memorable game this season, according to Taylor, was the varsity team’s first home game against John F. Kennedy High School. In the second half, he scored three touchdowns with nine carries. Successes such as these are what drive Taylor to keep improving. During the offseason, he plans to work on his strength conditioning, aiming to be bigger, faster, and stronger for next season.

Taylor is a true team player on and off the field. When observing how he interacts with others around him, it’s clear to see that Taylor builds good relationships with his teammates, peers, and friends.

“He’s a good friend to have on and off the field,” said fellow teammate and friend R.J. Harrison. “He’s a good player and he’s always motivating.”

“I want to be the first in my family to go all the way in football or baseball,” said Taylor.

Besides a career in professional sports, Taylor sees himself going into law enforcement or joining the Coast Guard. His goals are ambitious, and although for many, goals are just possibilities and musings, to Taylor, they’re all “part of the plan.”

“My plan is to go to college and play college baseball and football, and after that, to get drafted in either,” said Taylor.

With a promising future in sight, Taylor is so much more than someone who plays by the book. He has a game plan, and though life may throw some curve balls his way, his perseverance and self-motivation are what set him apart from the rest.