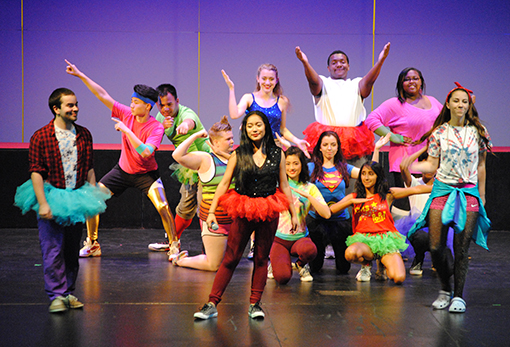 Have you ever heard that one song on the radio that you like, but you worry what others will think? That one song that gets stuck in your head that won’t go away until you have to start singing it. That is what you would call your guilty pleasure song. This year, many beloved guilty pleasure songs made their way into CVHS’ Pops Concert 2015, “You Know You Love It.”

Some of these songs included “Blank Space” by Taylor Swift, “What Makes You Beautiful” by One Direction, “Let it Go” from Frozen, and many more. The concert allowed choir students to sing in groups and perform their own solos. Throughout the show many performers displayed their musical talents.

However, the best performance for me would have to have been when Women’s Acapella performed “I Love Rock N’ Roll” by Joan Jett. The song was amazing, the performers were wonderful, and the costumes and set really fit the whole Rock N’ Roll vibe. Soloists in the song Zola Galbadrakh and Octavia Lim were outstanding.

I didn’t know what to expect when I attended this show, and I was surprised at how much I enjoyed it. I found myself humming along to the songs as they echoed through the theater. The songs really did get stuck in my head after the show.

Another amazing aspect of the performance was the amount of  student leadership that went into the making of the show. The whole show was student run by Pops directors Chole Billings, Carmen Hom, Chris Baker, Maya Para, Michael French, and Michalea Wood. These students took on a large leadership role and were responsible for coordinating rehearsals, organizing students, and supervising the progress of the numbers.

I would like to applaud the performers for an outstanding performance. Whether or not you are a fan of guilty pleasure songs, the show was highly enjoyable for all.

Listen to some of the performances here!
Apologize (One Republic): Men’s Acapella
I Love Rock And Roll (Joan Jett): All Acapella