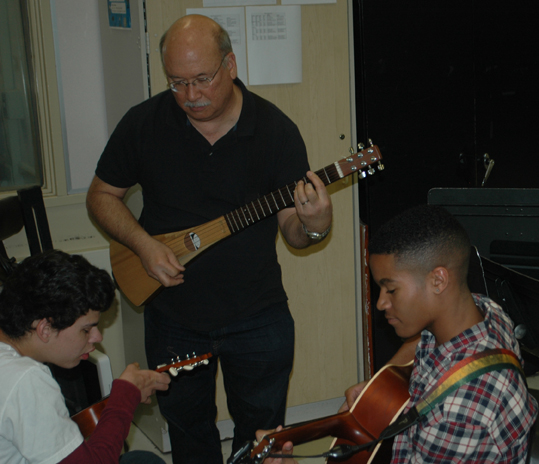 A glimpse inside of Steve Wilkinson’s guitar class reveals guitar students working hand in hand with students with disabilities, communicating by the universal language of music.

Wilkinson, guitar and geometry teacher at CVHS, has been nominated by parents for a special teacher’s Grammy Award, recognizing teachers who have impacted their students in the best ways possible, allowing them to grow to the best of their abilities.

The parents who nominated Wilkinson are Don and Juliet Barraza. The Barraza family has experienced first-hand the generosity and hard-working spirit of Wilkinson and his class. Their son Ben Barraza receives special education and electives that suit his needs are scarce. Once he experienced Wilkinson’s guitar class, however, the Barraza family knew that guitar class would be the best for him. Ben son has been with the guitar class for three years, since sophomore year.

“Our son loves it,” said Juliet Barraza. “Mr. Wilkinson creates a group of students for our son to play with and listen to.”

The Barraza family has nominated Wilkinson for his “desire to want to teach all children,” and his “ability to see students’ ability.” For the Barraza family, this is “just a glimpse of the appreciation we have for him.”

“As parents, to have our child accepted and embraced in his class is amazing,” said Juliet Barraza.

Wilkinson was quick to share credit with his students and the aides who work with the students with disabilities. “I feel that the nomination is more of a recognition for the guitar students and the special ed aides and how they interact with them,” he said. “It’s less of an award for me.”

Not only does the class benefit the students receiving special education, but it also benefits the guitar students. “By interacting with the kids with disabilities, the guitar students obtain a deeper sense of people, community, and life itself,” Wilkinson said.

“I want to minor in special education in college, so getting to interact with the special ed students, and watch them develop skills such as guitar is a good experience,” said guitar student Corrine Girard.

“It’s cool working with the special ed students. They always listen, even if I mess up they still listen. It’s really nice to play in front of them,” said guitar student Sean Luster, who also credited his teacher, Wilkinson. “As a teacher he has been playing guitar so long, and hearing what he plays is inspiring. He always encourages me to learn new songs.”

The next Grammy awards ceremony is about a year away, but Wilkinson, his students and the aides who enrich the lives of others through music are already winners.