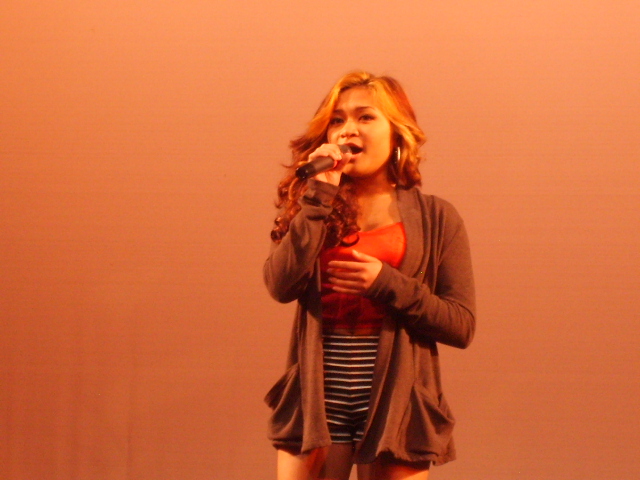 At age of 17, Santiago has accumulated fans from all over the world, becoming a sensation on YouTube with well over two million subscribers. Subsequently, upon Santiago’s achievement in her successful period on The X Factor show, her participation in providing footwear to impoverished children in developing countries incurs positive feedback over local communities. The mayor of San Lorenzo, Stephen Cassidy, has proclaimed on Jan. 13, 2014, as “Ellona Santiago Day.” The City Council has commended her for being an inspirational representative for the youth in striving to achieve her dreams and in making a difference worldwide.

Combing her mature sound and sophistication with her youthfulness, this pop singer attracts an audience of all ages. Santiago’s appearance on The X Factor show drew wide acclaim, with Simon Cowell remarking, “You are the girl I think I want to work with the most now in this competition.”

Performers brimming with talents graced the stage at the theater, in a display of fervor to empower changes, and came to help raise funds for the international project. Sponsored by Trust in Education and Cool Tea Bar, performers included Monica Mendoza, Charlz Mendoza, Justine Sarmiento, Joshua Chang, Aaron Morales, and others have also joined the line-up for A2 Goes TIKI, a one night only concert to aid the annual club project: The Answer is the Sun.

“Both benefit concerts have been huge successes,” said Interact Vice President Kimberly Tang.  “This time we tried revolving our benefit concert around the theme: Area Two Goes Tiki and it seemed like guests had more fun. In the midst of a stressful school year, we provided a night in paradise. However, the ultimate goal of both our benefit concerts are to raise money towards sending solar ovens to the people in refugee camps over in Afghanistan and we’ve come closer to reaching our goal. Not only is our community watching a great show, but they’re helping and learning about a great cause.”

The event, which will contribute its proceeds to the The Answer is the Sun, aims to raise funds to support the refugee families in Afghanistan whose lives have been affected by nearby wood fires. Smoke inhalation strikes Afghanistan, destroying around two million lives each year.

The concert alone, from ticket and intermission sales, raised a total of $2,035 and surpassed the halfway mark in the fundraising goal to raise $77,550 in support of the project. By end of the upcoming summer, Interact District 5170 plans on sending 5,170 solar powered ovens to Afghanistan refugee camps, providing families with a sustainable and more affordable source of energy.

“We are creating solar cookers, which will help the families to be able to cook and drink water environmentally friendly,” said Mariko Stenstedt, the international coordinator.

The project itself rooted in hope and was inspired by Interact spirit and vivacity. Adversities in third world countries may often seem a million miles away from reality individuals perceive today, but when a crisis occurs it affects humanity as a whole. By lending efforts to this appeal, Interact is expressing loyalty not only to people of Afghanistan, but to humankind. Aside from the benefit concert, a sequence of Interact events made a positive impact for youth, not only in communities but worldwide; simultaneously, the club will continue to inspire the uninspired and convey its core value.

“As an officer, it is my goal to inspire members that do not know about Interact,” added Mark Gruzman, treasurer and the host of the benefit show. “We host events such as concerts and charity dinners to raise money, but at the same time we also hope that these events are a chance for members to augment global understanding and render unselfish service under reflection of our service above self motto.  Every Interactor truly makes a difference on a global level.”